These raspberry Earl Grey eclairs are not only simple to make, but they're also incredibly delicious. Light, airy, and crisp choux pastry eclairs are filled with homemade raspberry jam, and Earl Grey tea pastry cream, topped with raspberry glaze and decorated with fresh raspberries, a sprinkling of freeze dried raspberries and edible flowers. They are perfect for for a special occasion.

My recipe for choux pastry is an adaptation of Cook's illustrated from the Baking Illustrated cookbook. Works perfectly every time. Choux pastry is also used for making cream puffs, profiteroles, and choux au craquelin.

The pastry cream can be made up to four days in advance and kept in the refrigerator. You can use it the day it's made, but it needs to chill and firm up before using.

Earl Grey tea is is infused into half and half to give a strong tea flavor in a medium saucepan. Eggs, sugar, and salt are whisked together until light and thickened slightly. Cornstarch is whisked in. The milk mixture is removed from the heat and the egg/sugar mixture is whisked into the half and half/tea mixture in a steady stream. You don't want to cook the eggs. 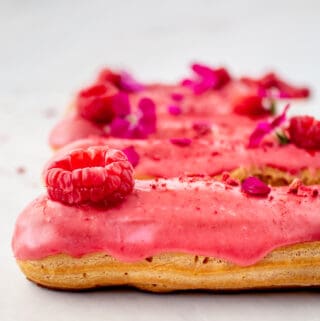 Eclair and pastry cream adapted from Baking Illustrated. Unfilled pastry shells can be stored at room temperature for 1 day, or frozen for up to 3 months.  To crisp up eclair shells that have softened, pop them into a 300F oven until crisp and warmed through.  Pastry cream can be prepared in advance and refrigerated until ready to use, for up to 4 days. Make sure to cover with plastic wrap touching the entire surface of the pastry  cream to prevent it from forming a skin. Eclairs are best the day they are baked and filled.
Tried this recipe?Let us know how it was!
« Peanut Butter S'mores Cake
Soft and Chewy Sugar Cookies »