Oh, these macarons. These are definitely a must add to your baking list. They’re the best of two amazing French desserts – macarons and crème brûlée. My crème brûlée macarons are filled with rich and silky vanilla bean pastry cream and custardy German buttercream sandwiched inside crisp and chewy vanilla bean macaron shells. Then they’re topped with sugar and torched until crispy and caramelized. Seriously, these are so, so good.

German buttercream is a custard based buttercream made with pastry cream, butter, a little bit of confectioner’s sugar and flavoring. Prepared pastry cream is added to whipped butter to create a rich and silky buttercream that’s not too sweet, with a texture that is similar to a meringue style buttercream. I love this buttercream for these macarons but it also makes a fantastic cake filling.

While the macaron shells cool, make the buttercream. Beat the softened butter until thick, pale and fluffy on high speed for about 5 minutes. Beat in the confectioner’s sugar. Add the pastry cream a tablespoon at a time. After the pastry cream has been added, beat for 2-3 minutes until smooth and fluffy.

Pipe a ring of buttercream around the outside of half the baked and cooled mac shells. Spoon 1/2 teaspoon of pastry cream into the center. Place a shell on top of the filling, pushing down gently to push the filling to the edges. 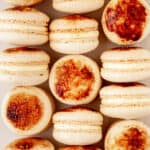 Christmas baking has began in my house, and what better way to start the season off than with these truly magical Florentine bars. Flavored with honey and orange, these caramel and almond topped shortbread bars are so delicious and so very hard to eat just one. Drizzle the bars with dark chocolate, and they rival any candy bar. These bars would make a beautiful addition to any cookie box or gift. and they ship really well too. 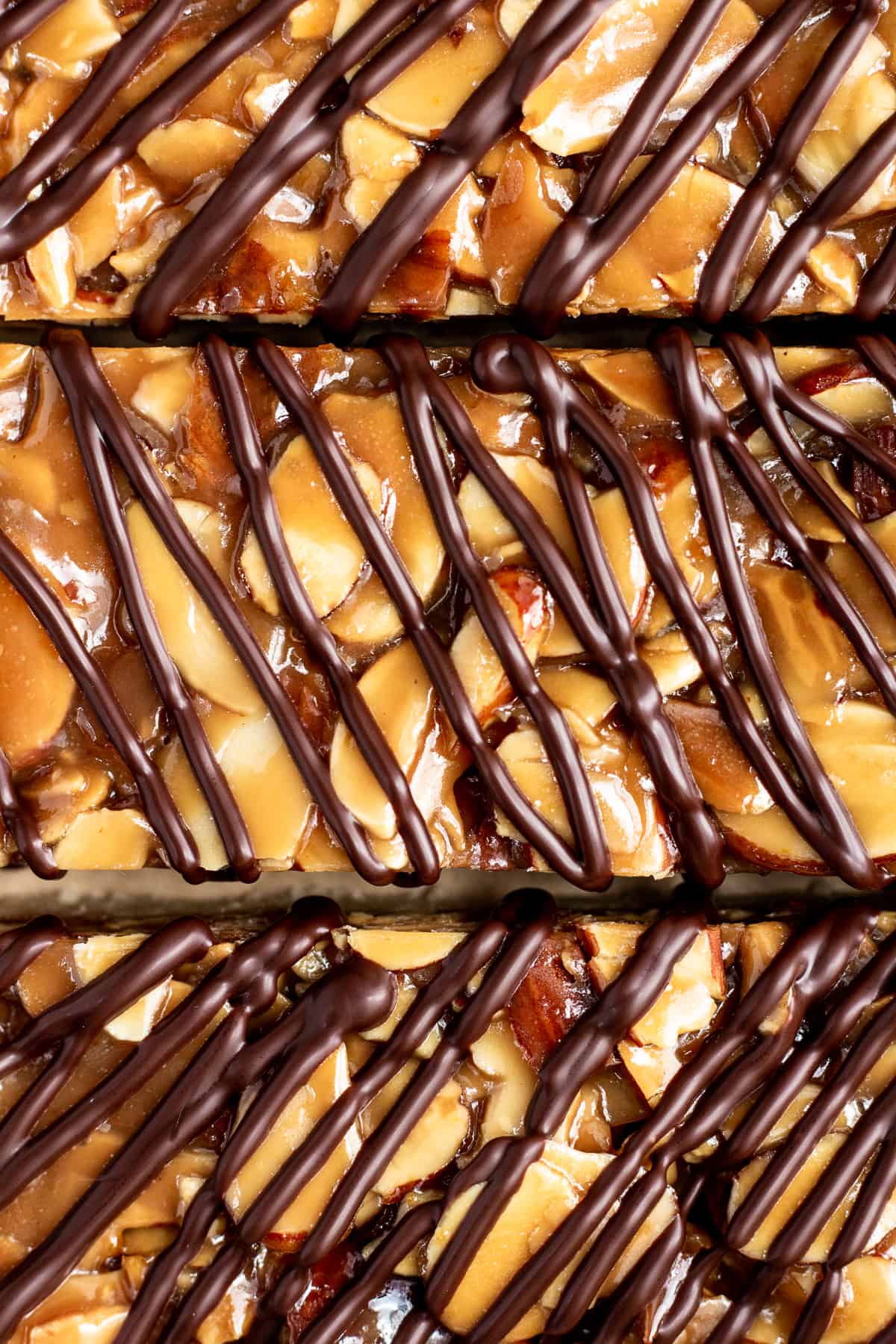 Florentine cookies, or lace cookies as they are sometimes called, are typically filled with nuts, dried and candied fruits. They are usually dipped in chocolate, and can be fickle to make in their traditional form. Traditional Florentines are delicate, chewy, sticky and absolutely amazing. One of my favorite cookies. To make my Florentines a bit easier to make, and ship to family, I put my Florentine mixture on a thin shortbread crust. Crisp, chewy and sticky and delicious. 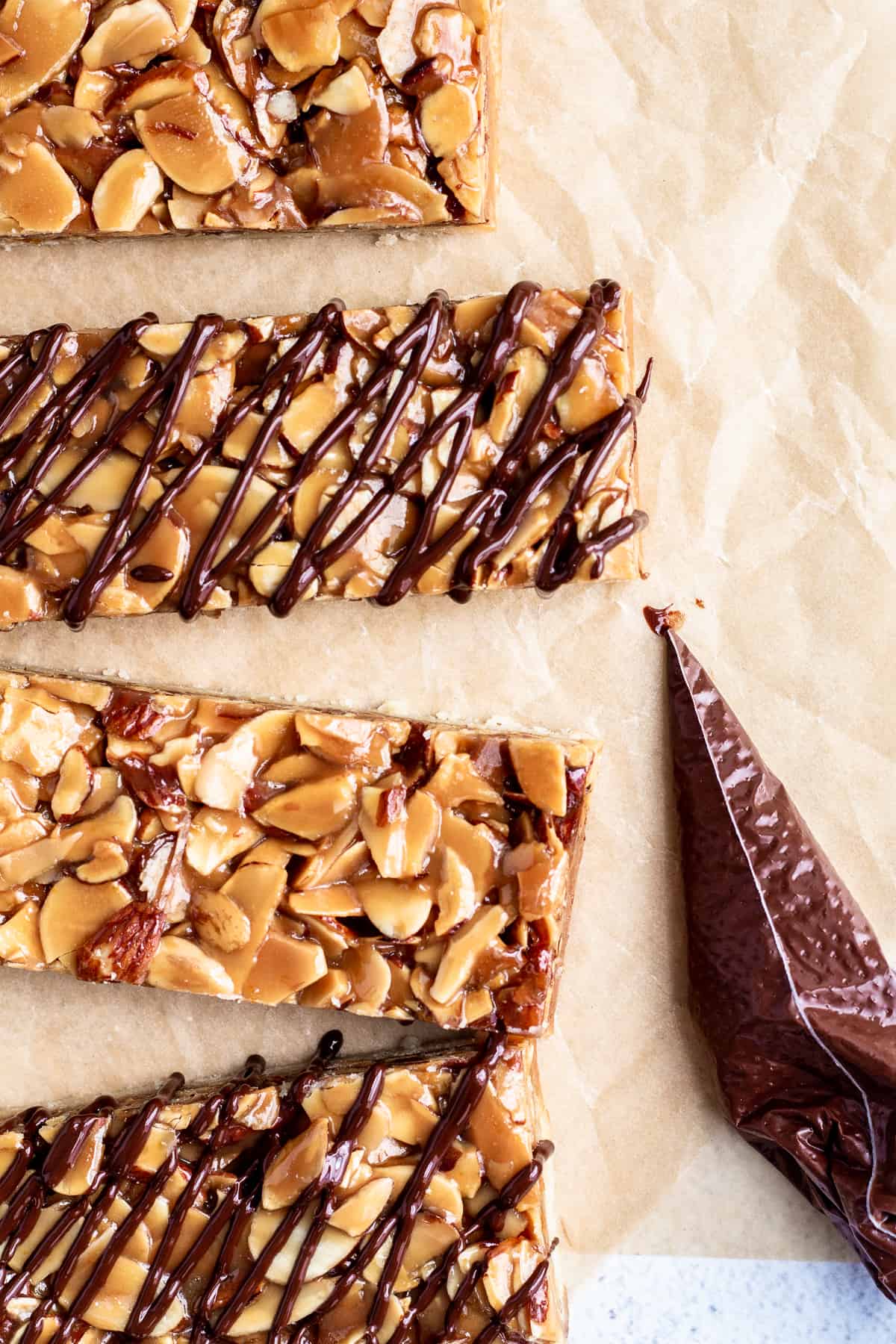 How to make the shortbread crust

The shortbread crust is easily made in a food processor (yay for shortcuts!) and pressed into a lined 8×8 square pan. My trick for getting flat and even crust is to push it in with the flat side of a bench scraper. For you weirdos like me that must have a perfect looking, even crust, this method is super satisfying and makes for a super flat crust. The crust is baked until lightly golden and cooled. 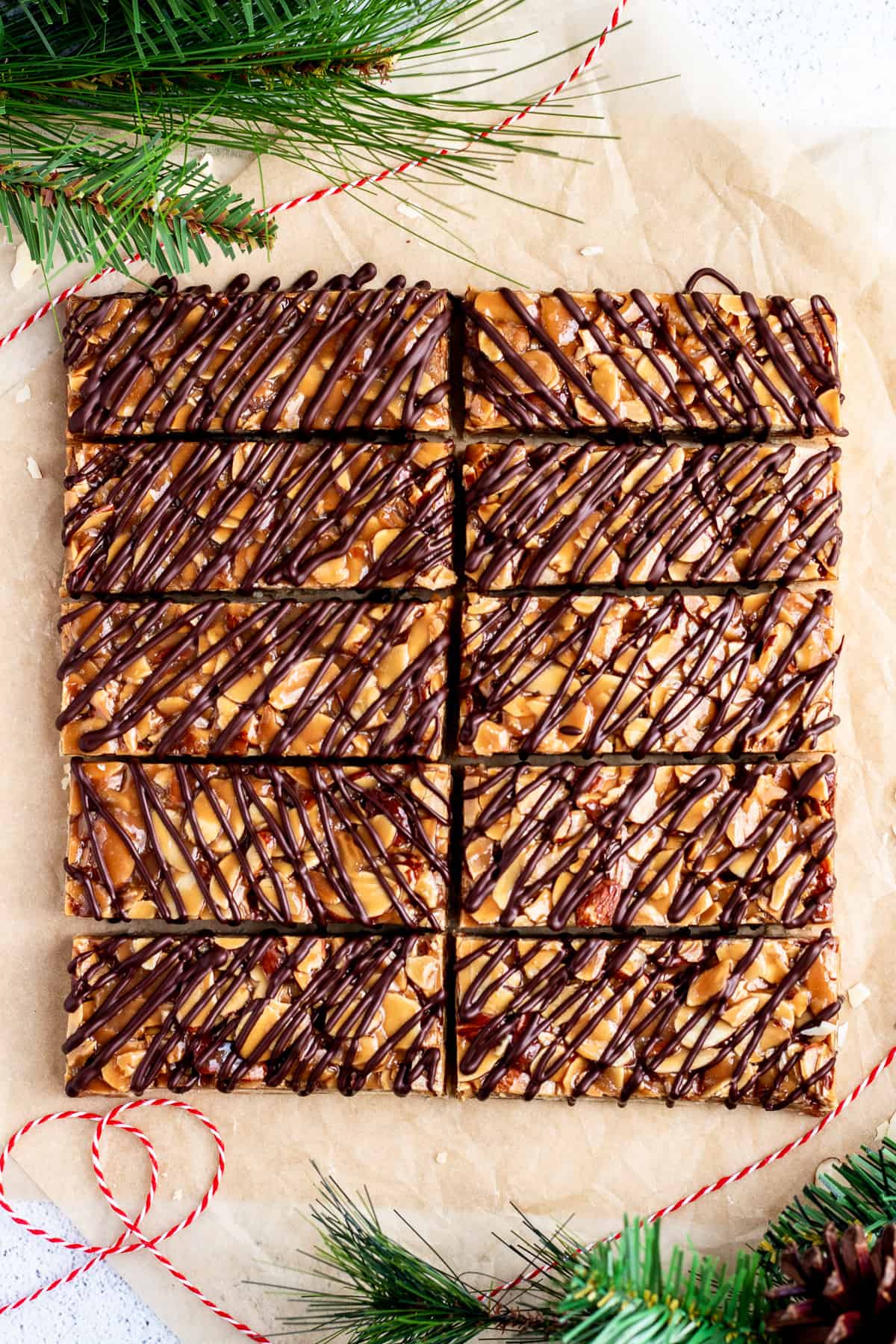 How to make the caramel topping

While the crust cools, the sugar, corn syrup, and water are combined and heated until amber in color. Butter and honey are added followed by cream. orange zest, vanilla and salt. Toasted, sliced almonds and any other dried or candied druit are mixed into the caramel. Glacé cherries, dried cranberries, figs, or candied oranges are so good in these bars. You can also use any nut you like. Hazelnuts would be delicious. When the nuts and fruit are mixed in, the caramel is spread over the cooled crust. The bars are baked until bubbly. 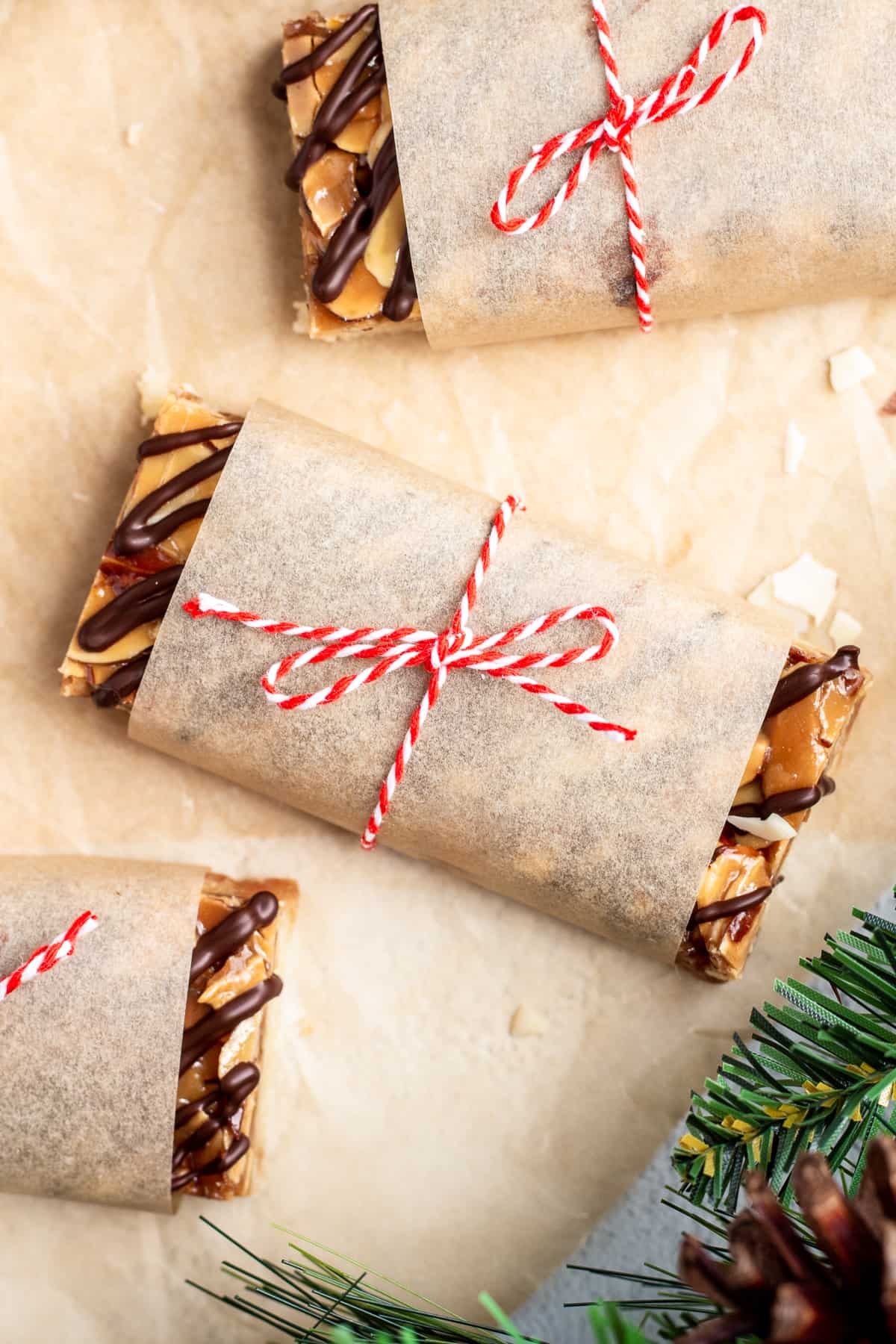 When the bars are cooled, they are cut into servings. Whilst baking, the caramel seeps down the side and coats the sides shortbread. Sometimes I cut off the outside edges of the bars (and I eat them, obvs) so that you can see the crust and topping, especially if I’m gifting these. Drizzle the bars with melted dark chocolate. Once the chocolate sets, the bars can be wrapped in parchment and tied off with twine or a decorative. Stack the wrapped bars in cookie boxes and they make a gorgeous gift. 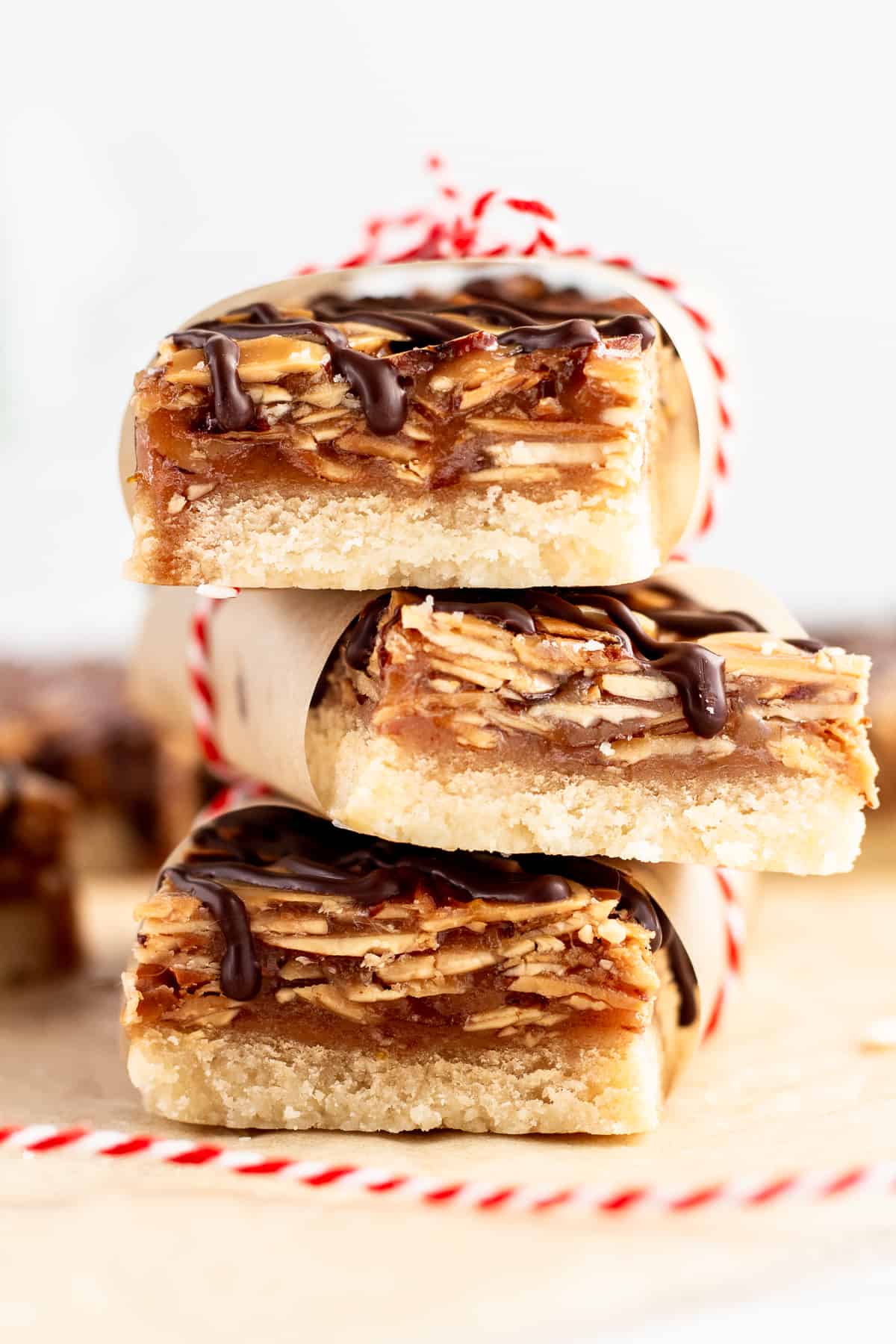 If you make these Florentine bars, let me know! Drop a comment or tag me on Instagram. I love seeing your creations.

For more holiday cookie recipes, check out these posts: 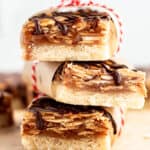 Blackberries are easily the prettiest berry in my opinion, but strangely the most under utilized berry in my house. We don’t eat them enough, and it’s a shame because they’re so, so good.  This past weekend when I was in the mood for a sweet treat, with blackberries on my mind, I made these blackberry pie bars. Ripe, juicy blackberries sit  on top of a buttery shortbread style crust, topped with an almond crumb topping, and baked until golden brown and bubbly. Buttery, and crumbly, with a deep sweet tart blackberry flavor, these bars are super delicious and highly addictive. 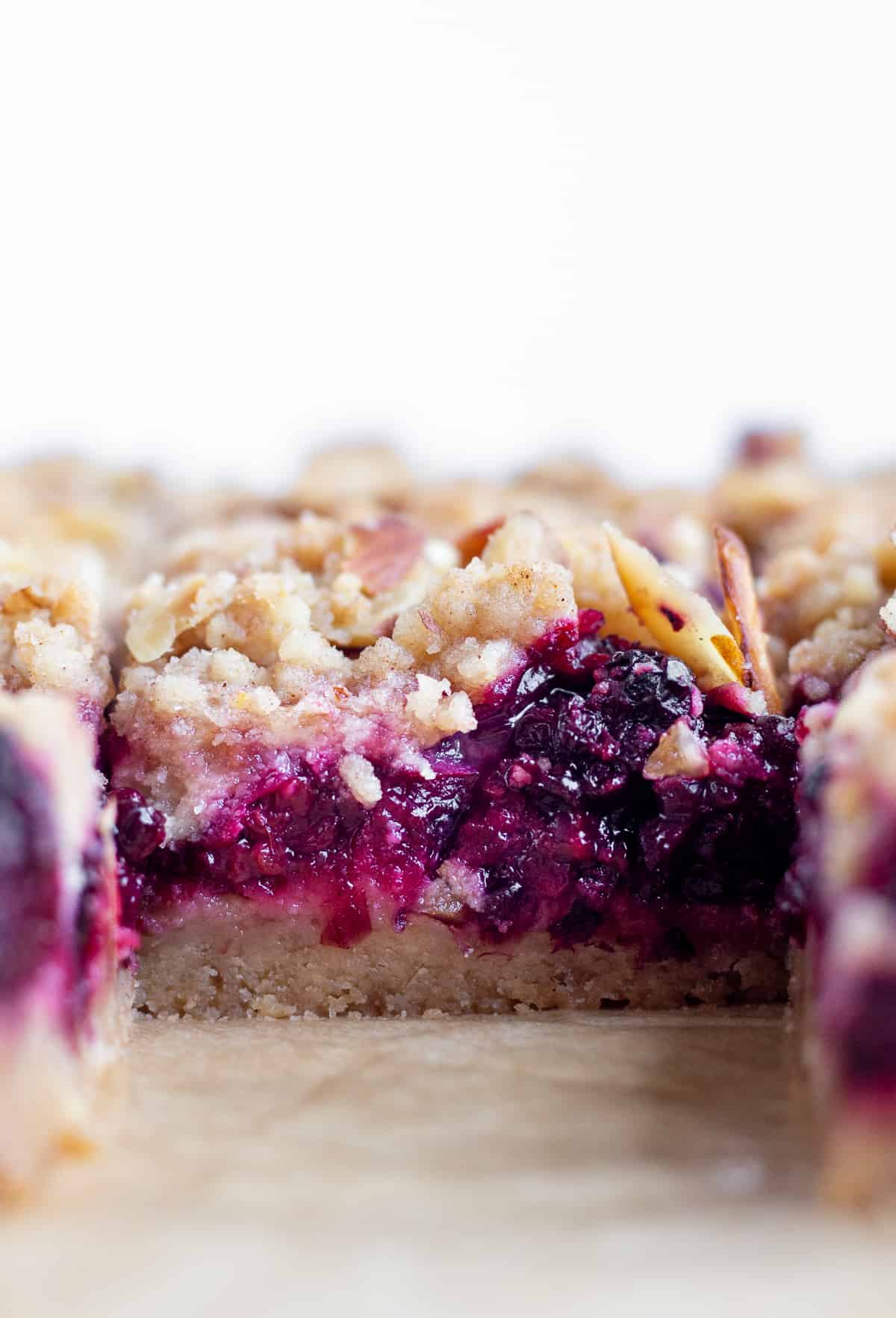 The crust for the blackberry pie bars is similar to a shortbread crust. The flour, sugars, salt, lemon zest and butter are combined in the food processor to make a crumbly dough. The dough will stick together if you remove a handful of the mixture out and give it a light squeeze. That’s how you know your butter is cut in properly, and the dough can be pressed into the pan. Before pressing the dough into the pan, reserve a cup of the flour/butter mixture for the topping.

I like to use the bottom of a measuring cup to evenly press in my dough. Once it’s evenly distributed, I use an offset spatula to make it super neat and level. I can’t help myself, I like to make a pretty crust before baking. It’s just one of  my baking quirks. The crust gets baked until it’s golden brown, then cooled before adding the blackberry filling. 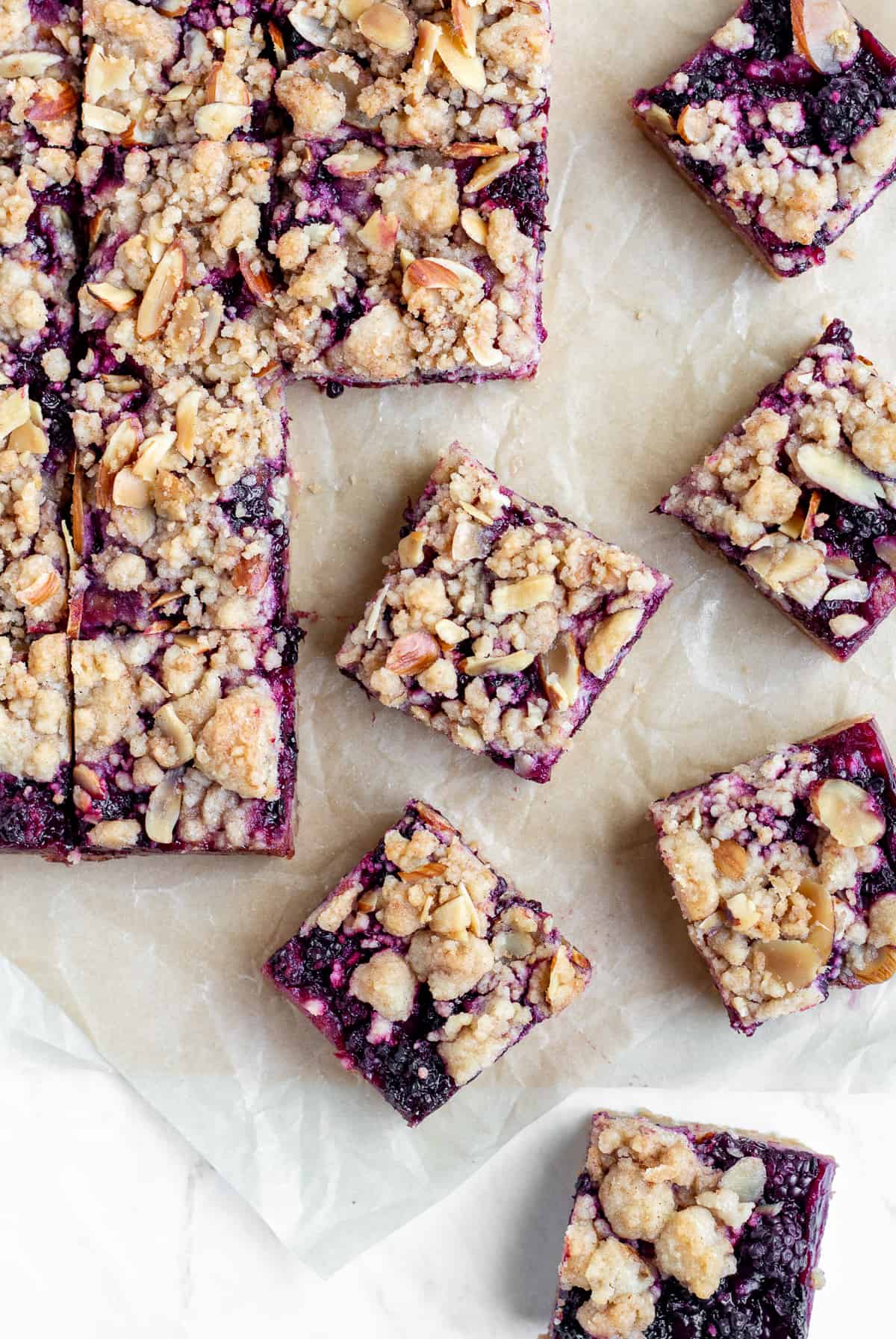 Remember that cup of the flour mixture we reserved when making the crust? That is also being used as the topping. Add a little bit of spice by adding some cinnamon, then use your fingertips to work the mixture together a bit to form some larger clumps. You can toss in the toasted almonds at this point, or wait to just sprinkle on after sprinkling on the crumb topping. 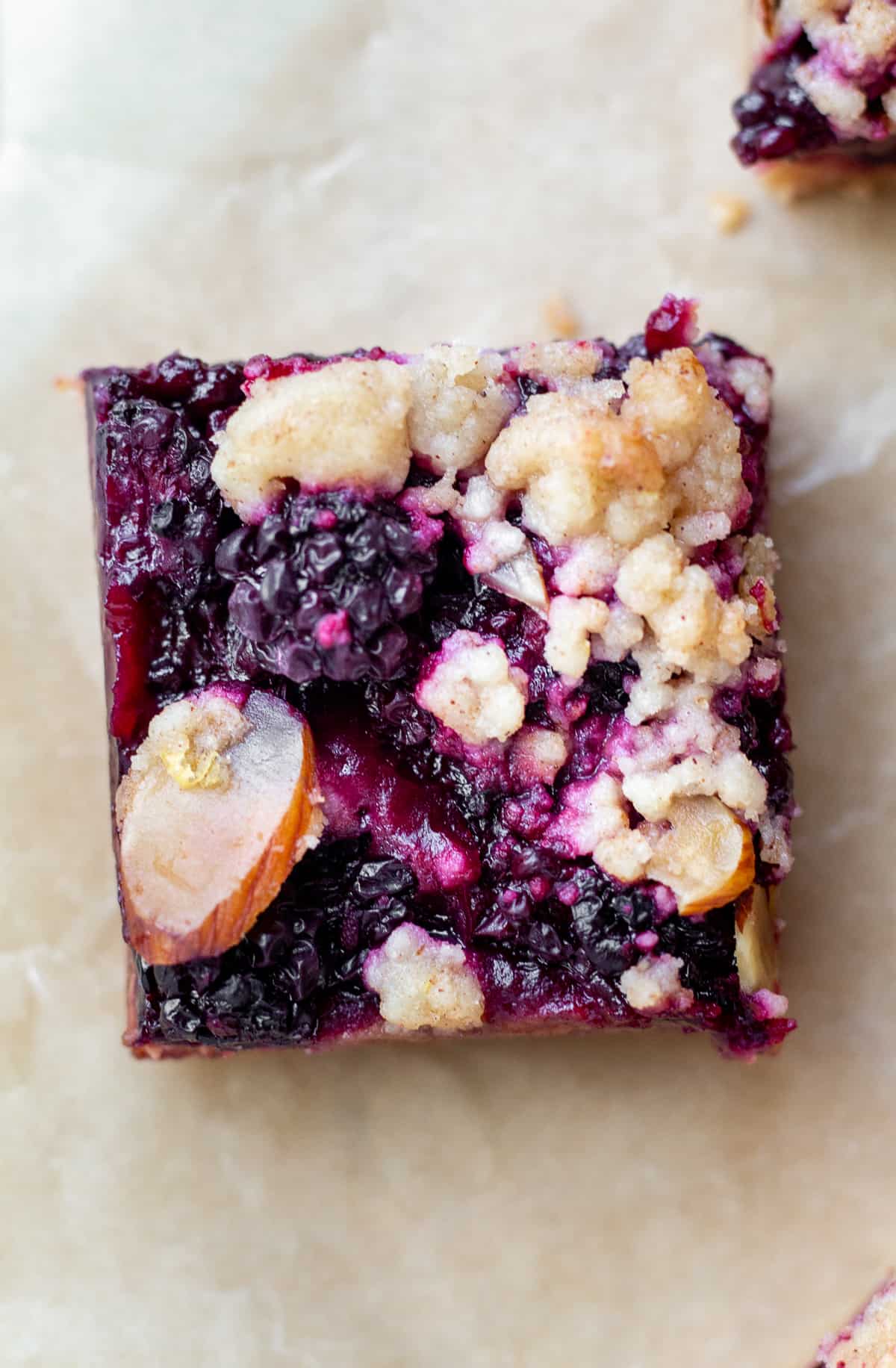 While the crust is baked, and is cooling, make the blackberry filling. I like to macerate the berries for just a little bit while the crust cools so that the filling is a bit more jammy. I used fresh blackberries, but you can use frozen. Defrost and drain them before using. Cut the berries into halves, or quarters if they’re huge, toss them with a bit of sugar, and lemon juice and let them rest, stirring occasionally. When the crust has cooled, and is just warm, combine the cornstarch with the berries and pour onto the crust. Bake the bars until the blackberries are bubbling around the edges and the topping has baked to golden brown. 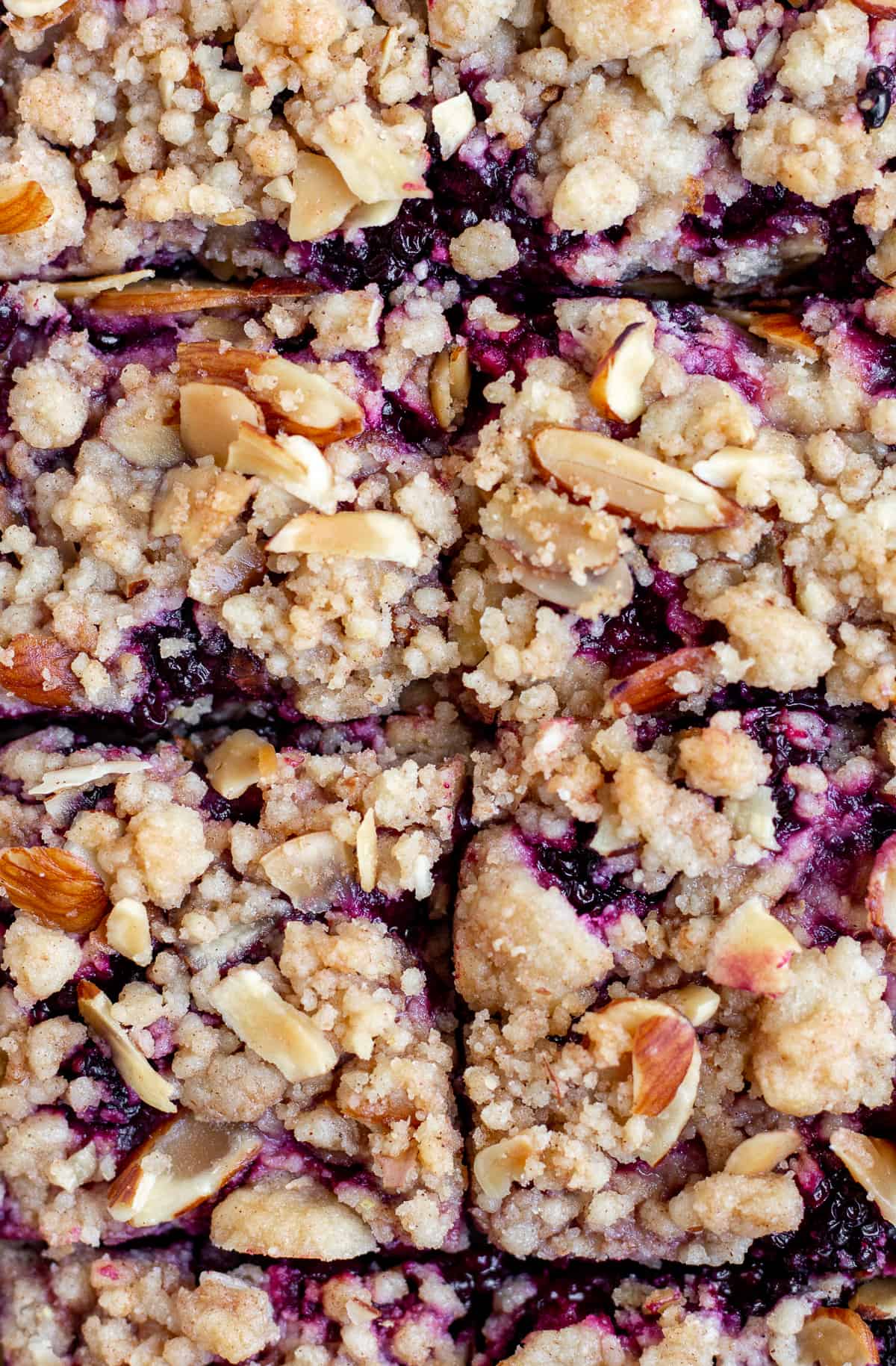 The blackberries create this thick and juicy deep purple jam when they bake. The crust is buttery, crumbly, and a bit caramel-y from the brown sugar. The blackberries make the crust around edges of the bars sticky and chewy from the juices seeping down the sides before setting up – easily my favorite part. So, so good. And that almond crumb topping just makes these bars. Buttery and crunchy, with a hint of spice, these bars are the perfect way to use up those summer blackberries. 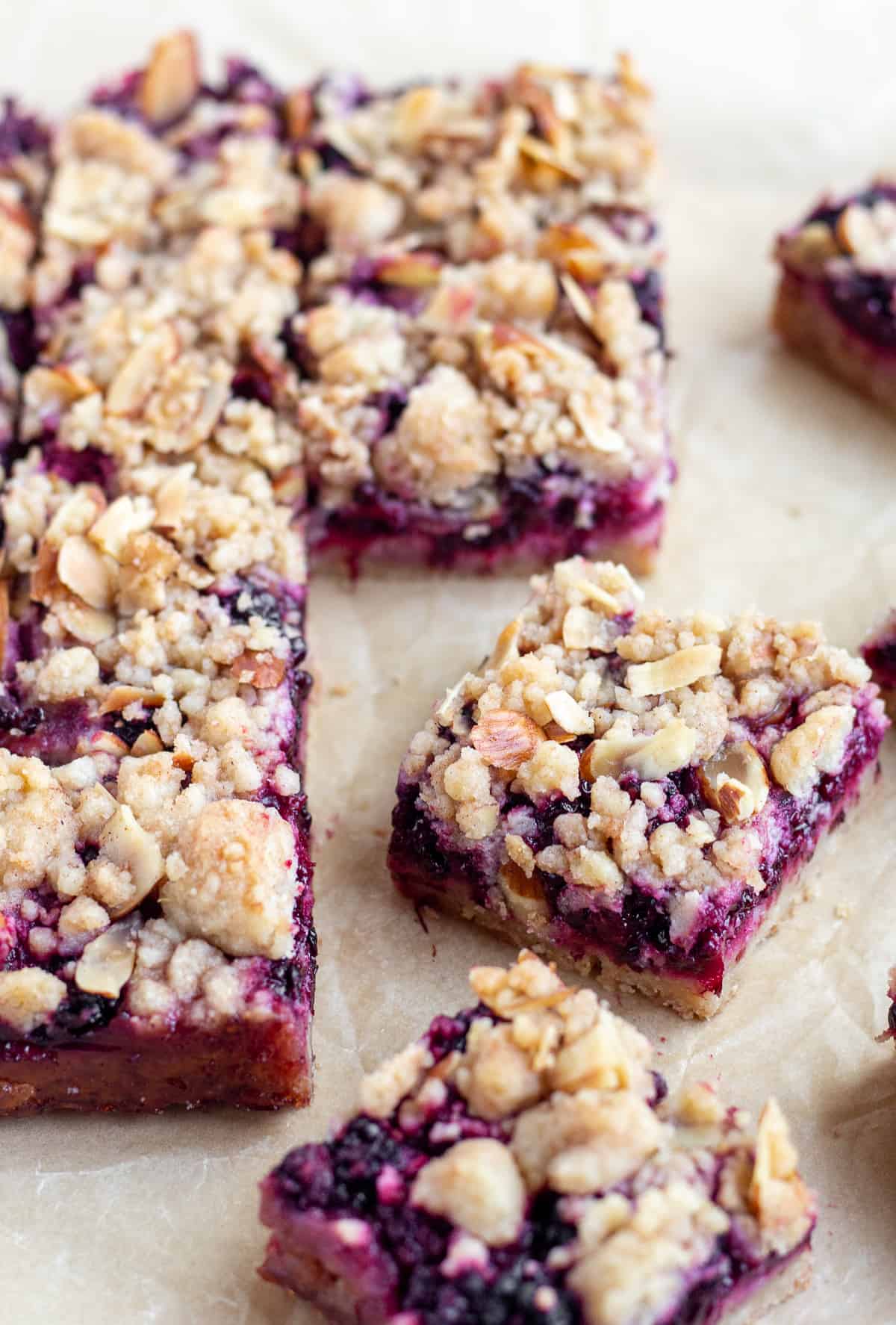 For more summer treats, check out these posts: 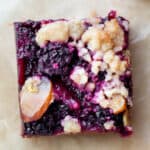