Whenever I ask you guys what kind of recipes you want to see on the blog, more often than not, the request is for my cake recipes. As many of you know, I ran a wedding cake business up until the end of 2019. It was a lot of fun (and a lot of hard work) and I built a super successful business, but decided it was time to take a break to be able to spend more time with my family as well as blog and teach cake decorating full-time. The cake recipes I share here are mostly ones that I used for my business, tried and true client favorites that I have made for years. This strawberry rose buttermilk cake is a recipe I have made many, many, many times and is always a favorite. 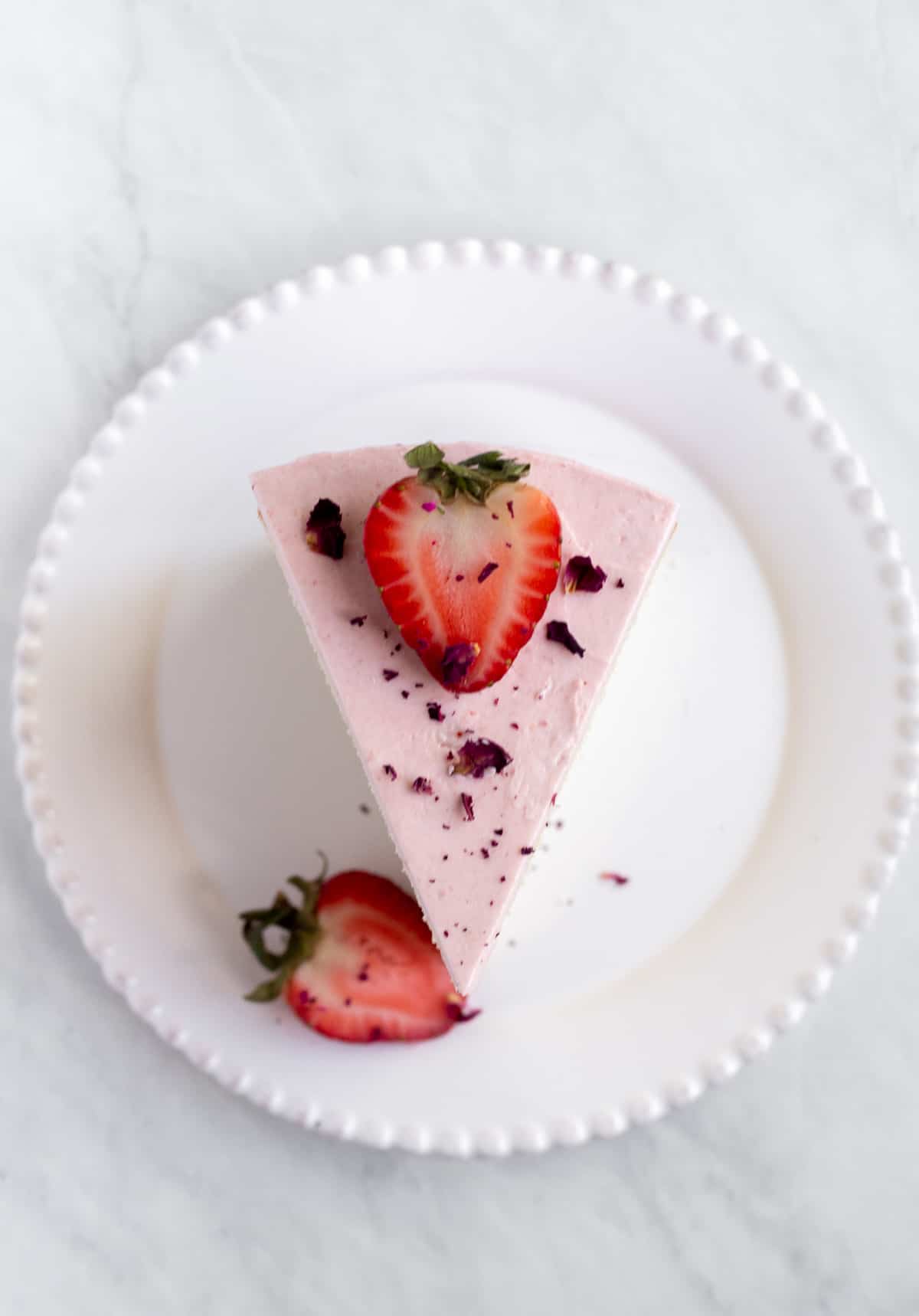 My strawberry rose buttermilk cake is one of those cakes that combines flavors in such a way that they’re balanced, and light but straightforward in flavor. This cake is super fruity from the strawberries, and slightly floral from the rosewater, with a deep flavor and a bit of a tang from the super moist, and tender vanilla buttermilk cake. 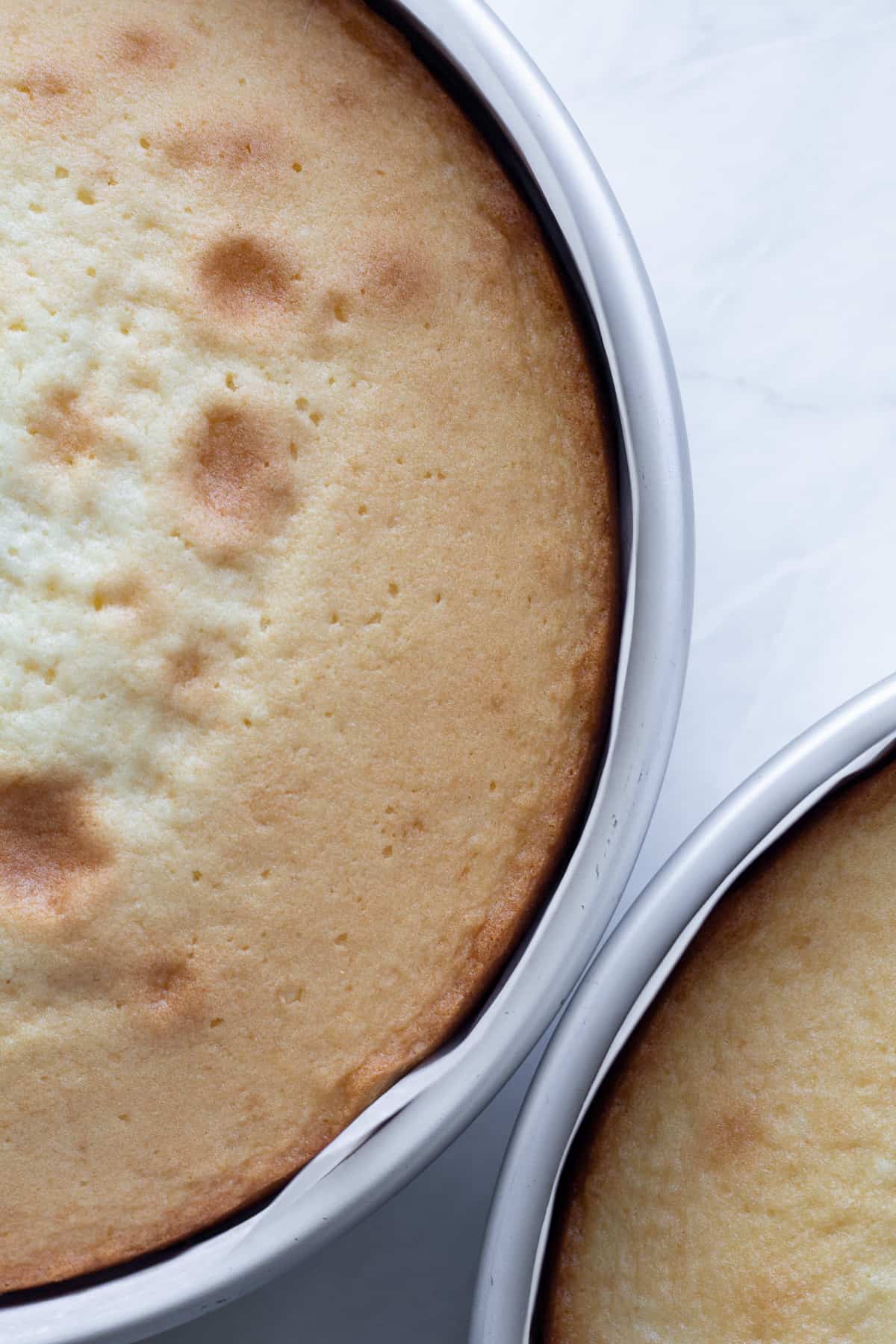 About the mixing method

Let me tell you – this buttermilk cake is a KEEPER. It’s the perfect foundation for most fillings and frostings, and it makes for beautiful layer cakes. This buttermilk cake is mixed using the reverse creaming, or two stage method. Reverse creaming cakes have a tighter, more delicate and soft crumb. They tend to be more compact, with less of a rise compared to creamed cakes, and have a melt-in-your-mouth texture. Reverse creaming cakes can be delicate, so they are easiest to layer, carve, stack, etc. when they are chilled. The reverse creaming method gives me exactly what I’m looking for in a white/yellow cake base. This method of creaming and my recipe is partly adapted by Rose Levy Beranbaum’s The Cake Bible. In recent years, I’ve used a recipe I adapted from my dear friend, Liz over at Sugar Geek Show, from her book Artisan Cake Company’s Visual Guide to Cake Decorating, which is also an adapted recipe from The Cake Bible. 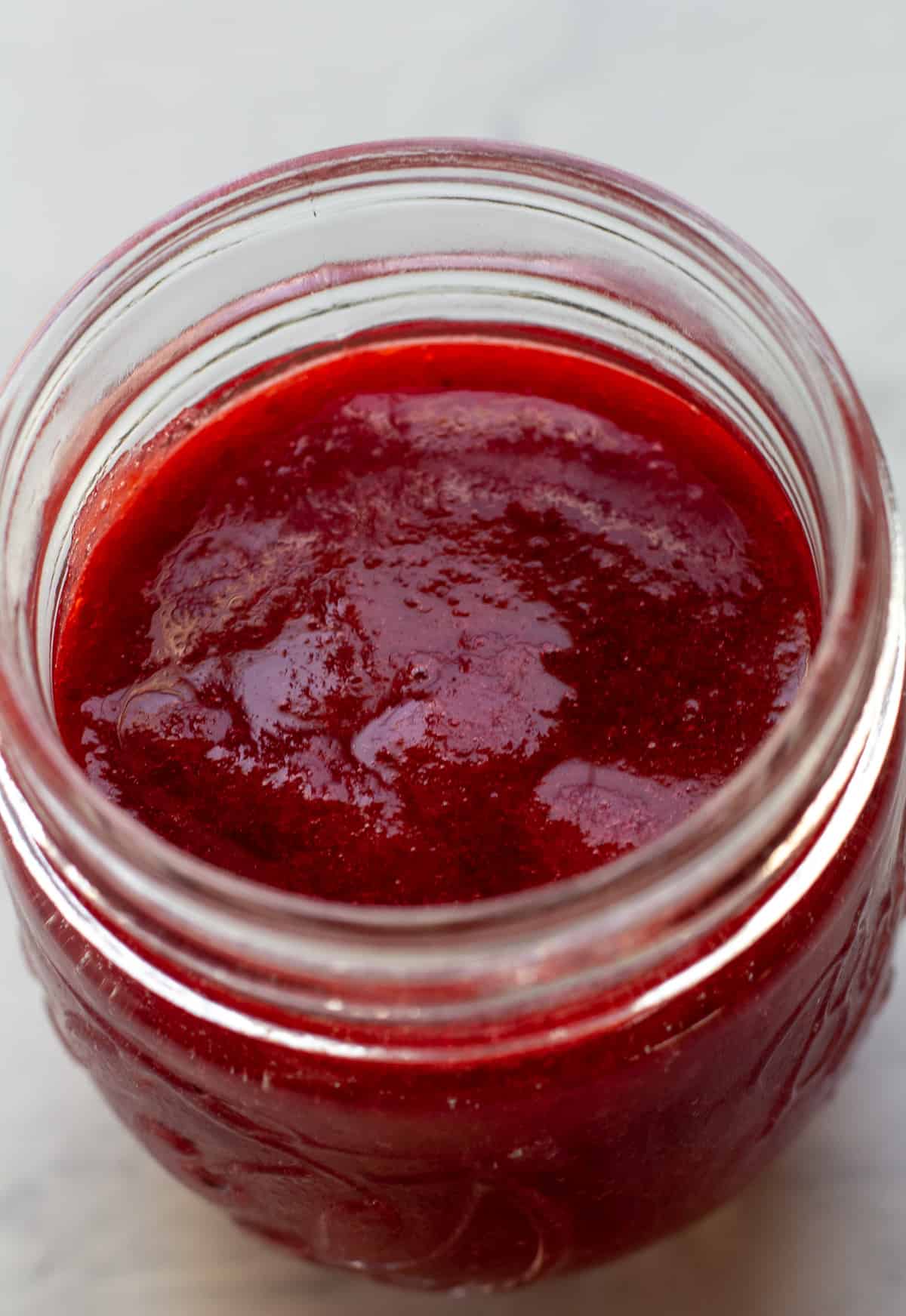 How to make the buttermilk cake

If you haven’t made a cake using this method, don’t be afraid of it. It’s super easy if you follow the notes on the stages of batter texture along the way in the recipe. And, while we’ve been conditioned to “mix until just combined” or “don’t over mix” so that we don’t over develop the gluten which would result in a tough cake, those rules don’t apply the same in this cake. In the instructions, butter is mixed into the dry ingredients until the mixture resembles coarse bread crumbs. Mixing the butter into the dry ingredients coats the flour, preventing too much gluten formation.

Then, a small amount of liquid is added, just until the dry ingredients are *just* moistened and the mixture is beaten on medium-high for two full minutes until lightened in color, and thick like soft-serve ice cream. This mixing is crucial as it helps to form the structure of your cake. The remaining wet ingredients are added in three parts. The cake batter will be a bit on the thicker side. 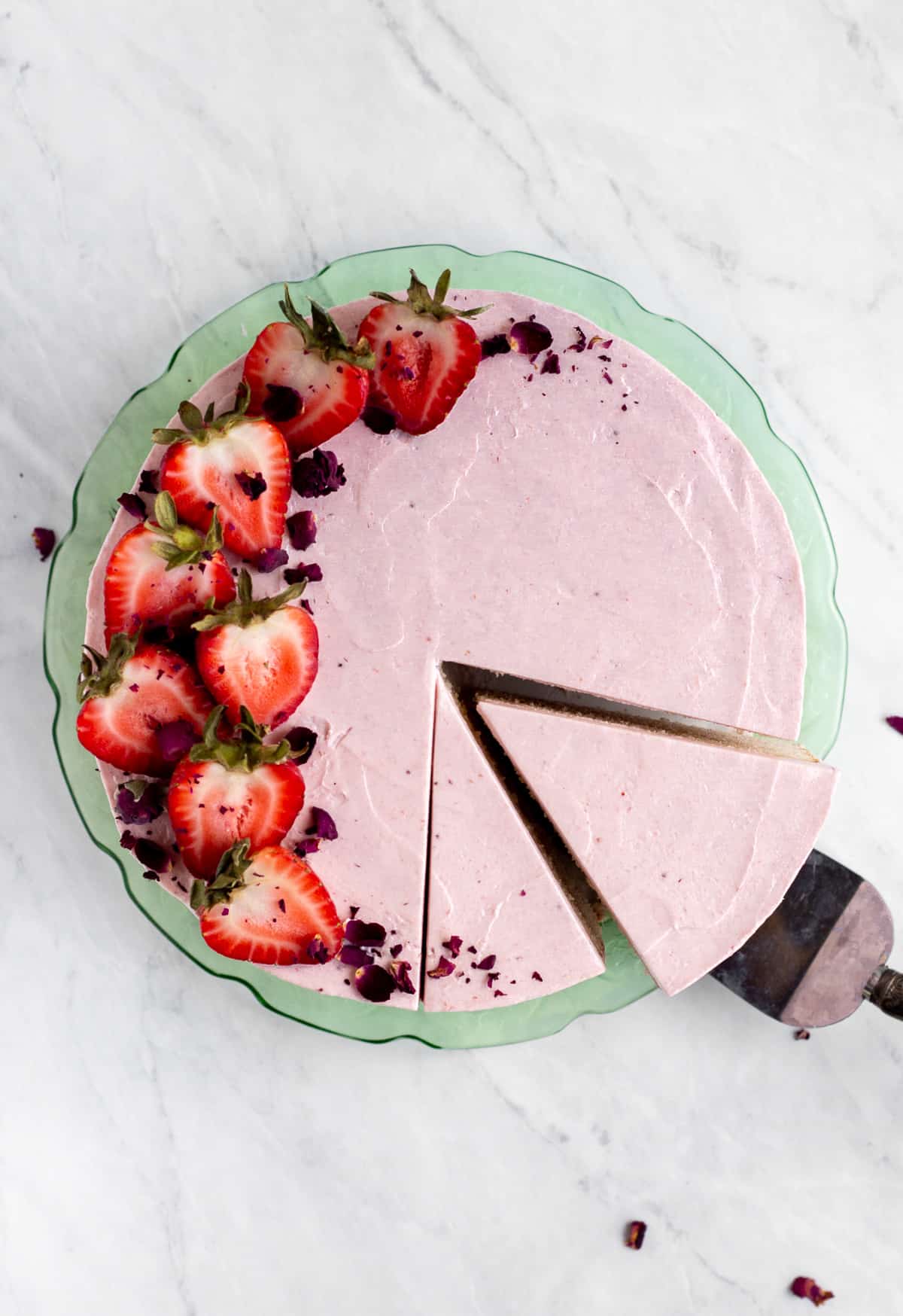 You will also notice that this recipe doesn’t have baking soda, but uses all baking powder instead. A bit unusual considering there is an acidic ingredient – buttermilk. Baking soda neutralizes the acid in the buttermilk, and also contributes to the rise of the cake. Too much acid can prevent the cake from developing the proper structure, but also can prevent it from browning. So, why did I skip on the baking soda then? Neutralizing the buttermilk also tames the flavor.  I wanted full buttermilk flavor. This cake is not too acidic without the baking soda so it browns well and rises properly.

For this recipe, a scale is also required. Scratch cakes can be tricky to make sometimes, and the baking science is very important in the making and baking of scratch cake. We need cakes to be consistent in taste and texture, and bake up with no problems – no sinking, no overflowing, no rubbery layers, etc. A scale is key in getting consistent results. I use this one from Amazon. This recipe will not work if you convert it to volume (cups) measurements. 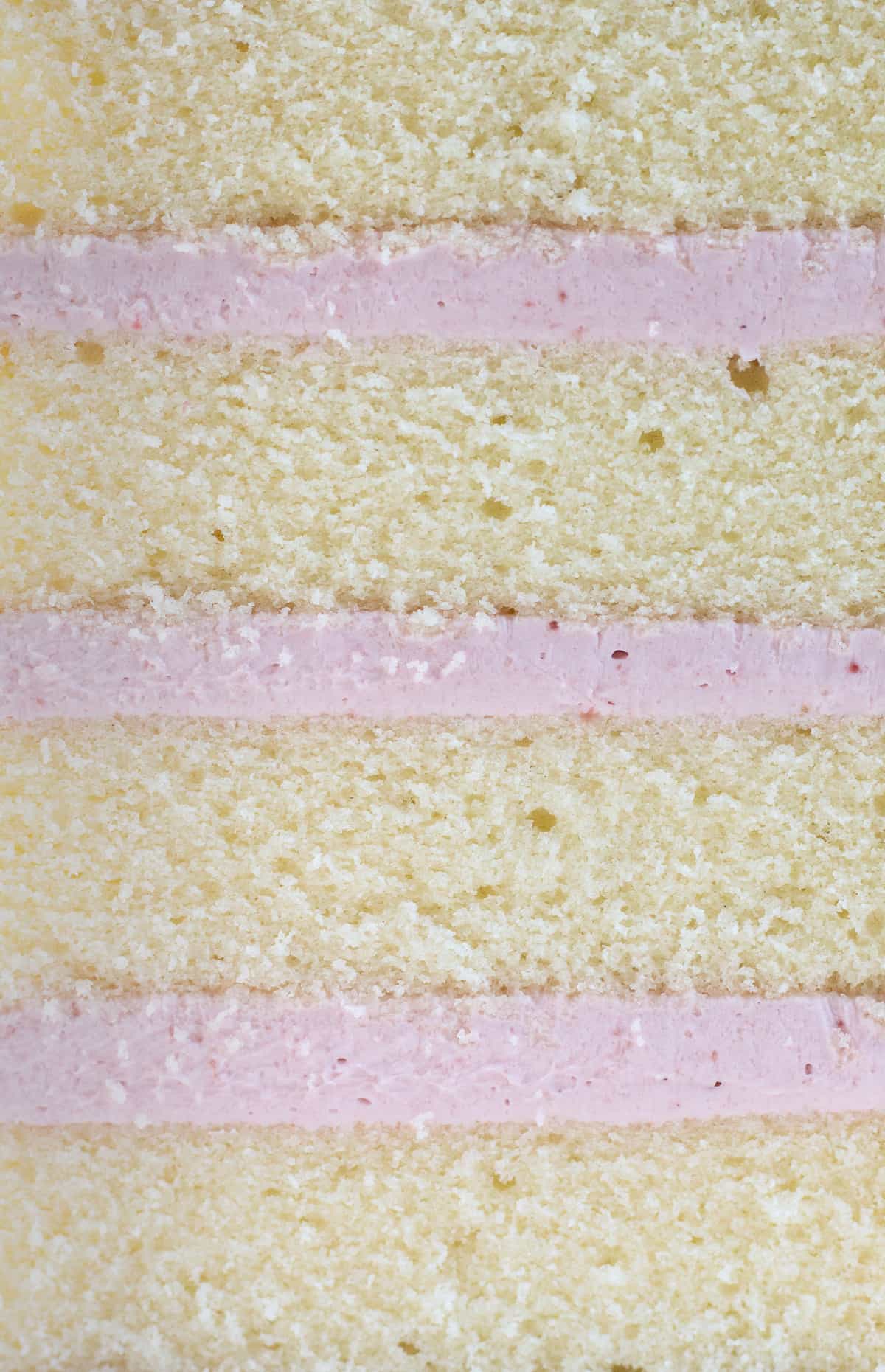 I also do not recommend using this recipe for cupcakes. This recipe is designed to bake up somewhat flat, and is also more compact. I use a different, slightly less delicate recipe for cupcakes (it’s ah-mazing) that can accompany all sorts of fillings and frostings that I’ll share soon.

About the Italian meringue buttercream

For this cake, I opted to use velvety smooth Italian meringue buttercream. My how-to post for Italian meringue buttercream can be found here. The strawberry buttercream is super fruity, silky and smooth, with just a hint of rose water. To really get a super concentrated strawberry flavor, I recommend using a jam (homemade or store bought) over a puree. Purees aren’t as concentrated in flavor and can be a bit watery. I’ve provided my strawberry reduction jam in the recipe. Really, strawberries and rose go together like peanut butter and jelly. They compliment each other really well and are amazing when paired with the buttermilk cake. However, you can omit the rosewater if you wish- this cake will still be amazing. 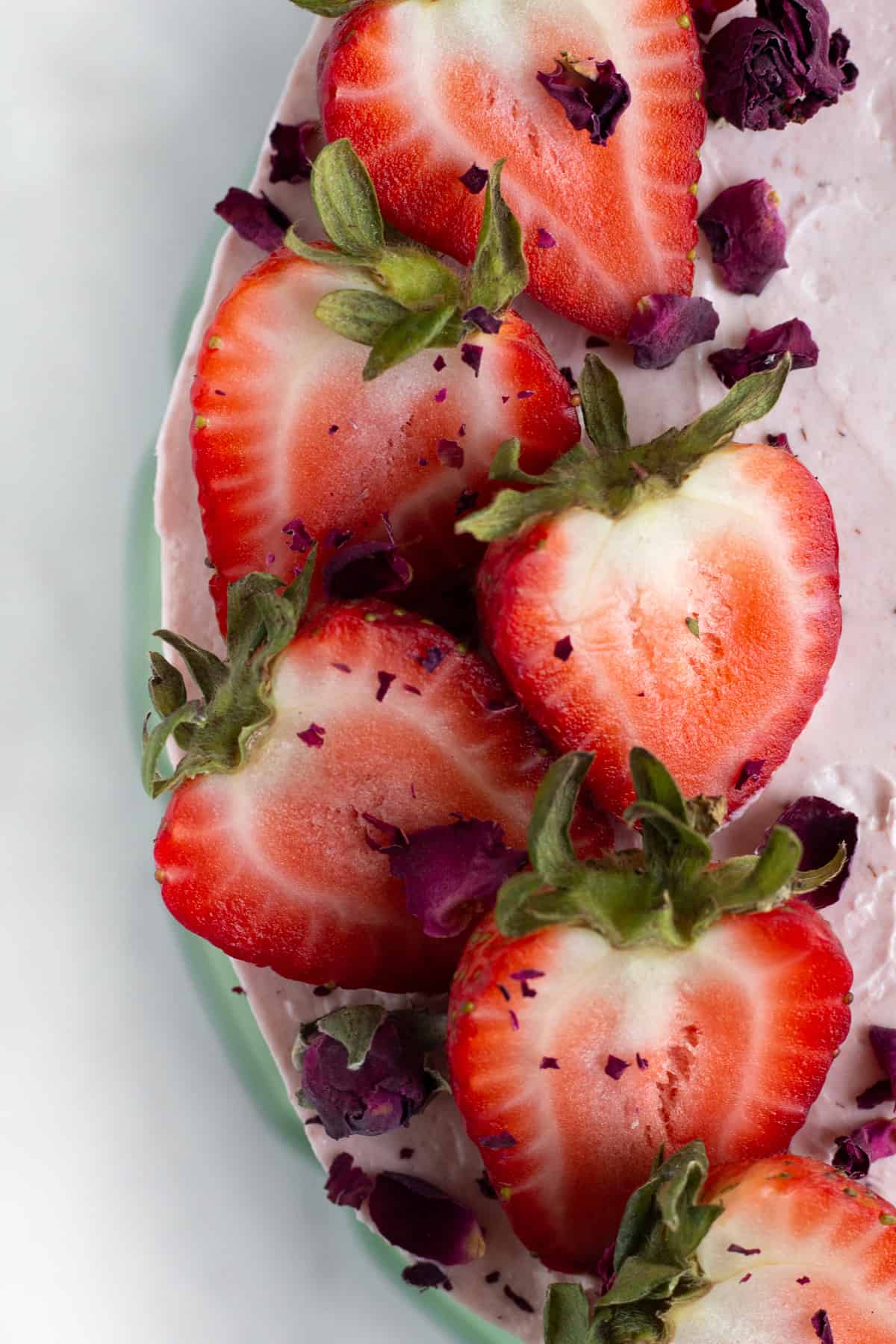 I decorated my strawberry rose buttermilk cake with fresh strawberries and edible dried rose petals. I love the delicate, romantic look of it.

In the pictures of the cake in this post, the cake was sliced while it was slightly chilled. Cutting a chilled cake allows for the cake to not fall apart when cutting it, but also it makes for neat and tidy slices. Serve the cake at room temperature.

For more cake and cupcake recipes, check out these recipes: 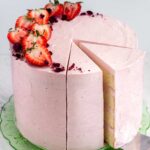 For the Strawberry Buttercream:

Italian meringue buttercream is the lighter, fluffier, more stable cousin to the ever popular Swiss meringue buttercream. Both Italian and Swiss buttercreams are similar as they are light, silky smooth, and melt in your mouth. They both create a smooth cake surface and chill firmly for sturdy stacking and transportation. The main difference between Swiss and Italian is in the preparation of the meringue. 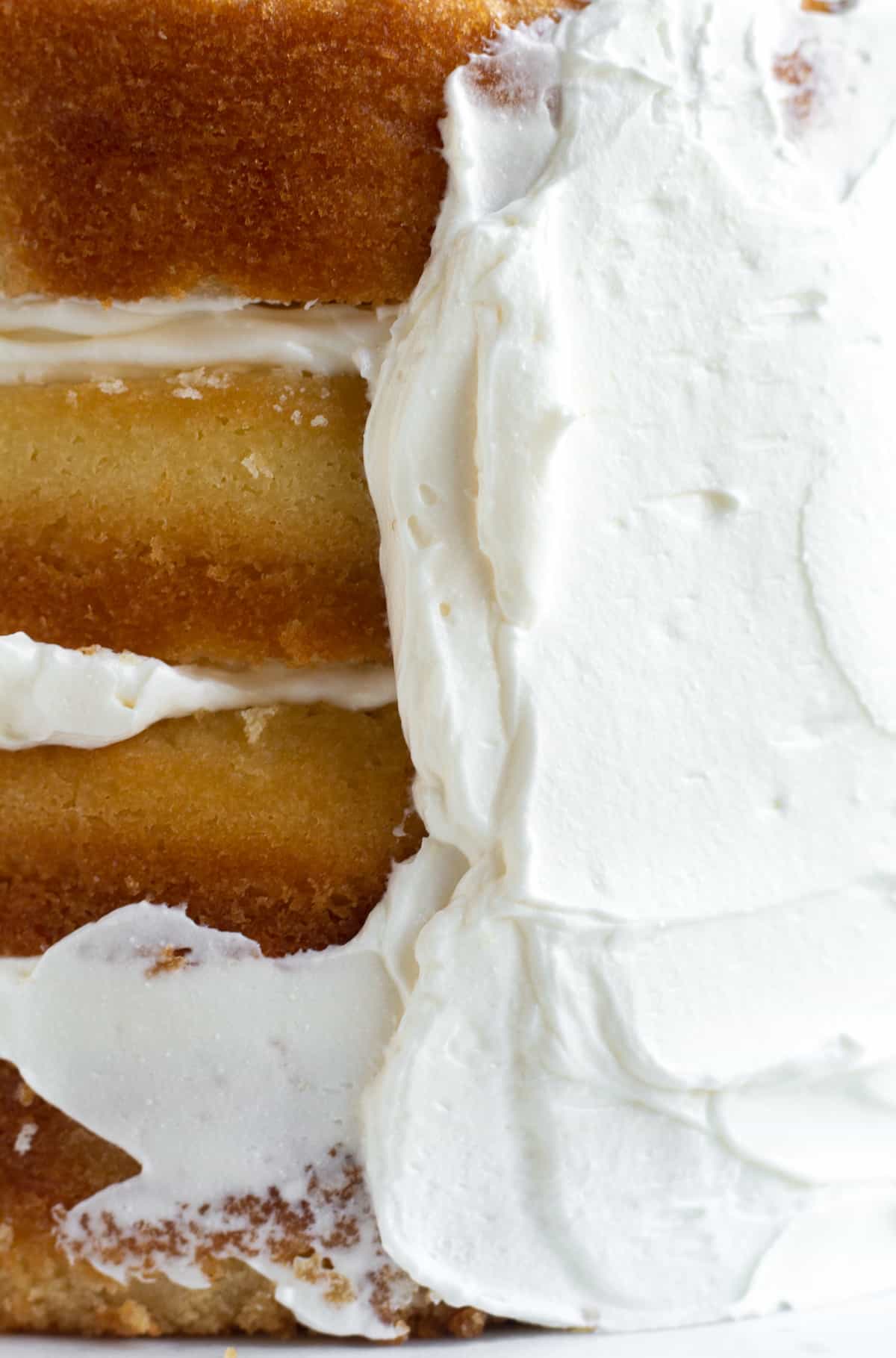 The Italian method of boiling sugar and water to a high temperature to create a sugar syrup and then adding it to soft peak egg whites, allows for a more stable meringue, or a meringue that will not deflate or breakdown easily over time. This is especially beneficial when using this buttercream for a cake for an outdoor event or on a warm day. With caution of course. If you frost a cake with any butter based buttercream and leave it outside in the sun in mid-July in the Midwest, it’s destined to be a buttery messy puddle quickly. But, for moderately warmer temps, it is the best butter based buttercream to use. 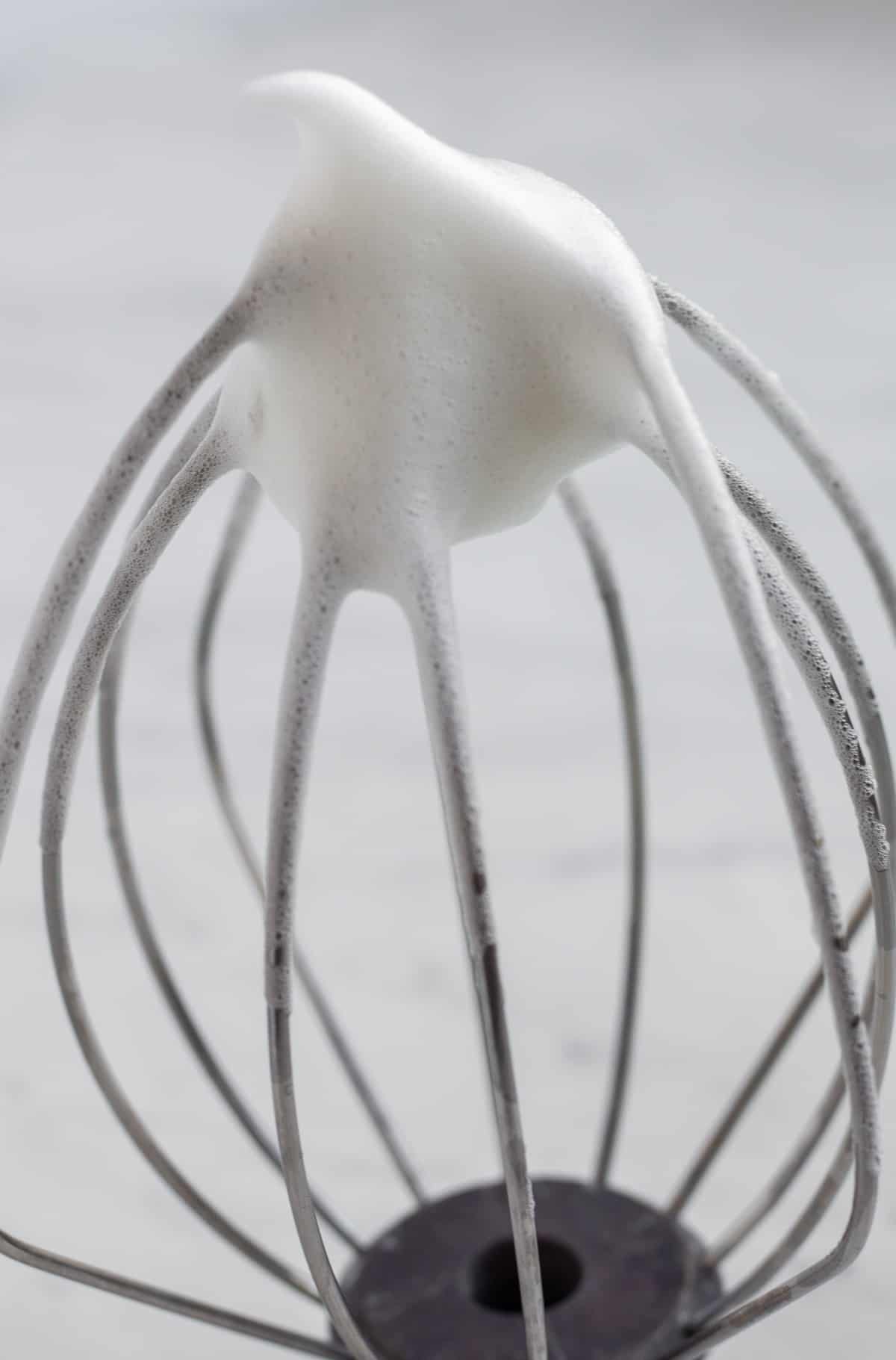 Egg whites and cream of tartar whipped to soft peaks.

How to make Italian meringue buttercream

Italian meringue buttercream is made by combining sugar and water into a saucepan and boiling until softball stage, or about 240-245F. As with caramel, mix together the sugar and water. Then stop stirring. You don’t want to create sugar crystals – which would give you crunchy bits in your otherwise silky smooth buttercream. While the sugar is boiling, whip up the egg whites and cream of tartar in the bowl of a stand mixer with a whisk attachment until soft peaks form. When the sugar mixture reaches temperature, remove from the heat and turn your mixer up to medium-high speed. Drizzle the *very* hot sugar mixture into the bowl, between the side of the bowl and the whisk attachment. 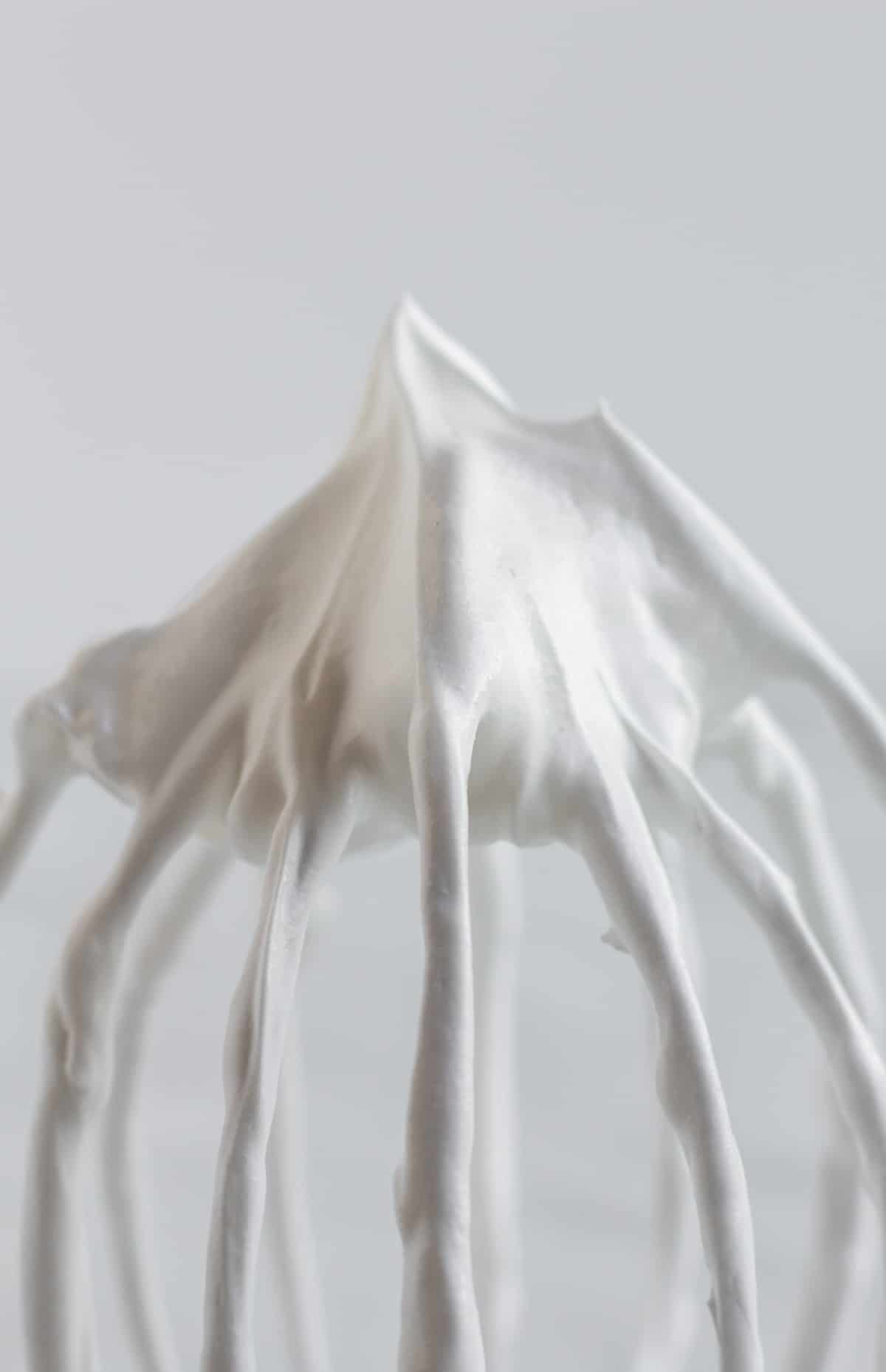 Sugar syrup has been added, and the meringue has been cooled and beaten to stiff peaks.

Continue to mix on medium-high until the outside of the bowl is just lukewarm to the touch, or the mixture is at 80F. Really though, don’t stress about having exactly 80F meringue here -I’m really just giving you a temperature as a guide. Just feeling that the bowl is lukewarm means it’s ready for the butter. You can wrap the bowl with ice packs or cold towels to help cool the meringue down faster if you wish. 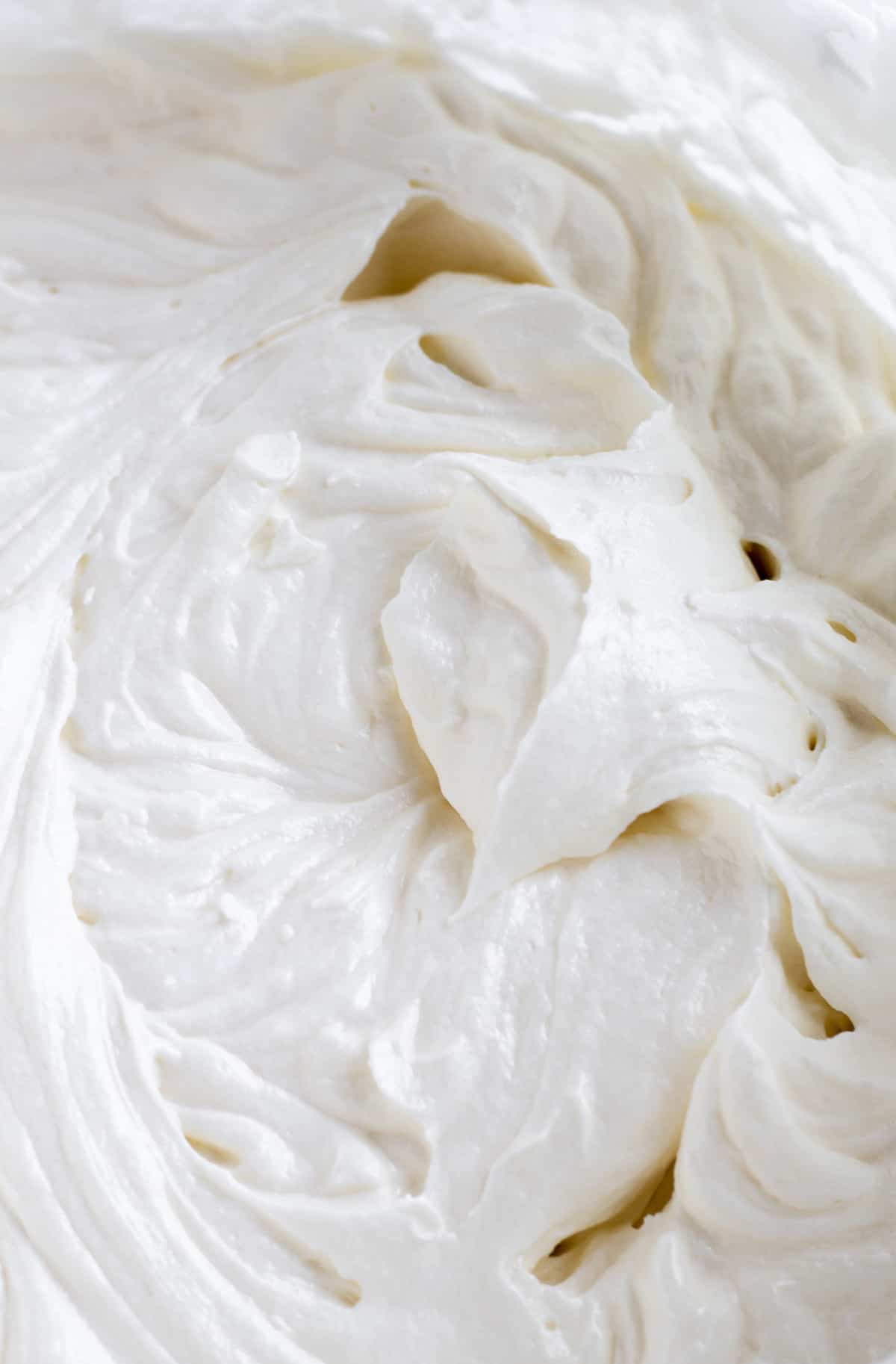 Right after all the butter was added. A bit deflated, lumpy and thin. Keep mixing! 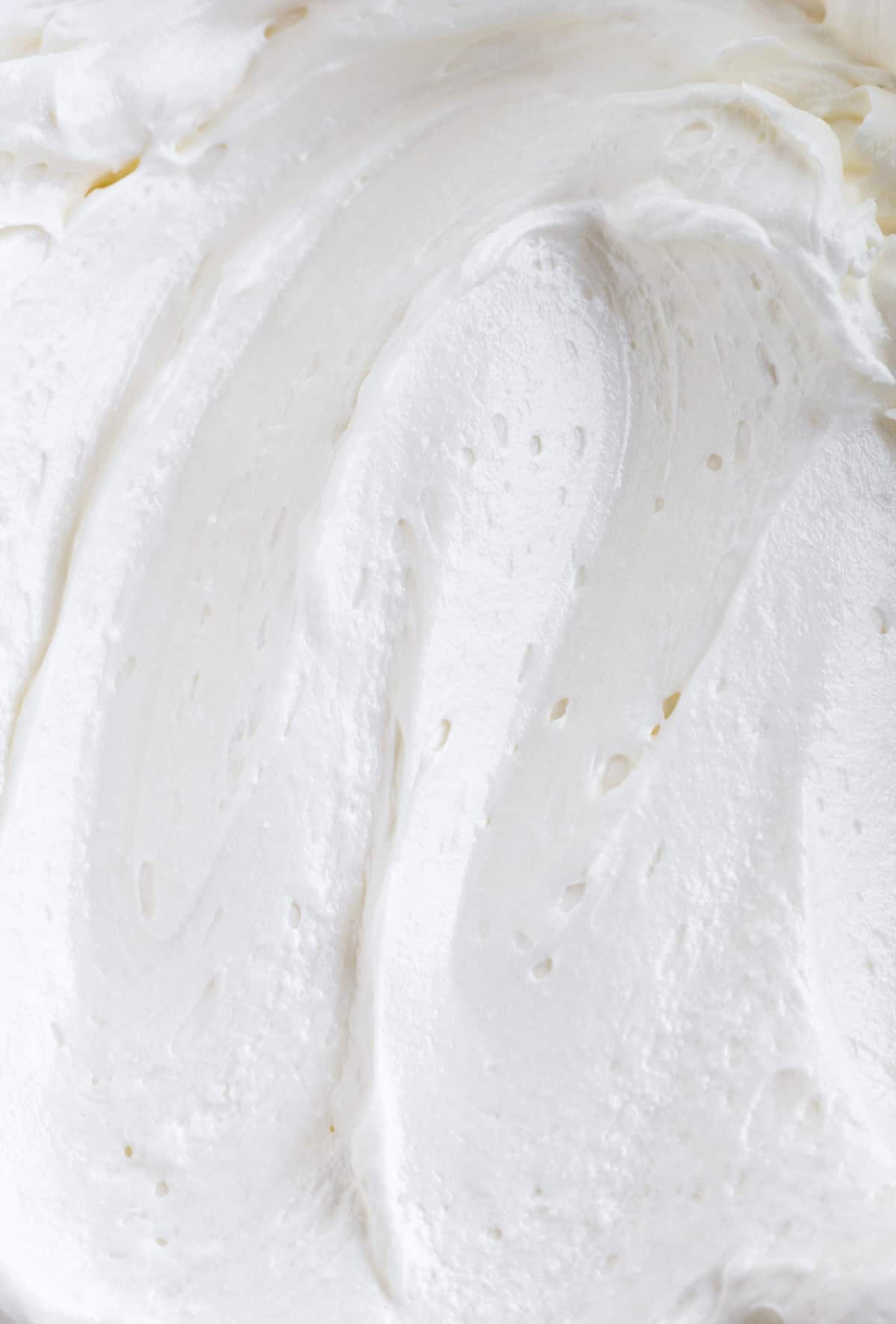 The buttercream is fluffy, light and smooth. Those little holes and divots are air bubbles. Mix on low for 10 more minutes to smooth them out.

*The buttercream can be refrigerated and also freezes well. Bring to room temperature before rewhipping, otherwise the buttercream will separate. If this happens, heat the metal mixing bowl with a kitchen torch while continuing to whip. Stop applying heat when the buttercream comes together.

*Color meringue buttercream with gel color, or ideally chocolate colors (which are oil based). Do not use liquid color as it can dilute the buttercream.

*If at the end of mixing, your buttercream is a liquidy, soupy mess, pop in the refrigerator for 15-25 minutes to cool it down. Look for the edges of the buttercream to start to harden, then it should be ready to whip again. Repeat this process again if necessary. 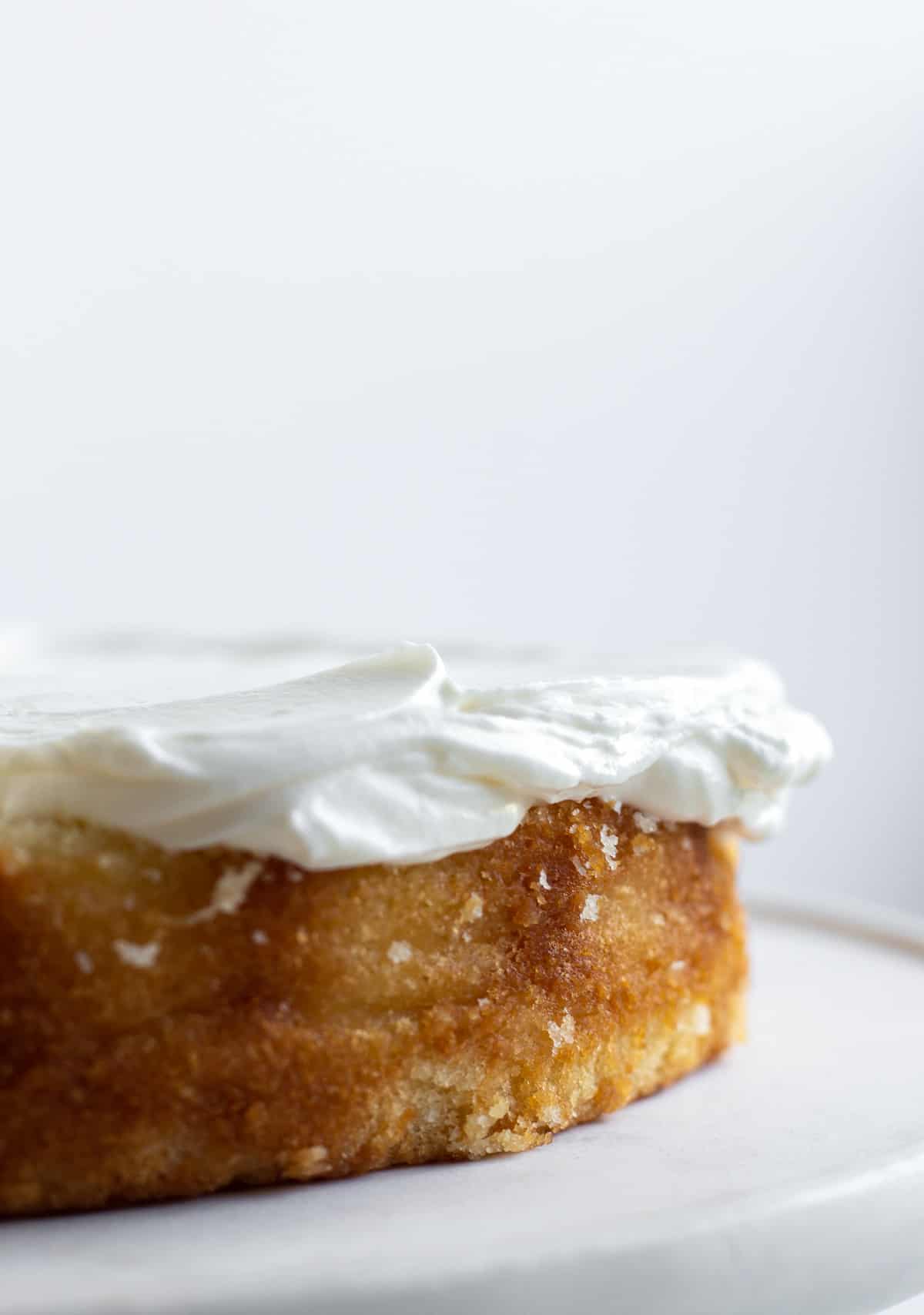 *Keep going! If you have whipped up your egg whites and heated your syrup to the correct temperature, the rest of the process is pretty foolproof. If it is curdled, separated, lumpy, the butter was too cold, etc. Keep mixing. It might take a bit longer but keep mixing and it will come together. 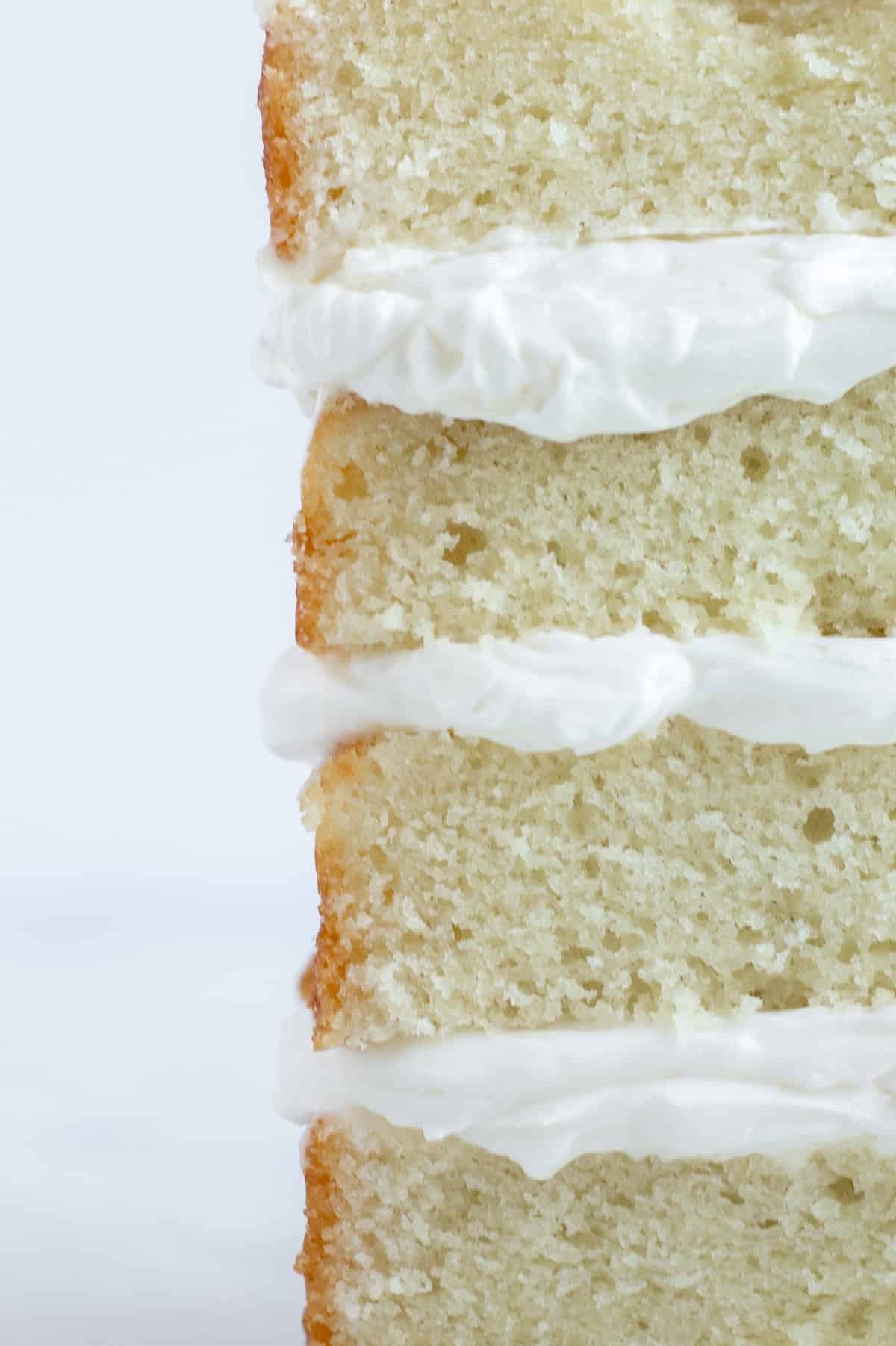 The recipe below is for vanilla bean Italian meringue buttercream. But the flavor options are endless. Here are a few popular flavors to experiment with. Adjust the quantities to suit your taste. I like my buttercream flavors as concentrated as possible. 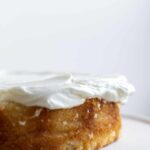 Buttercream can be kept at room temperature for up to 2 days, refrigerated for 1 week in an airtight container and frozen for up to 3 months.