Sometimes I get a recipe idea stuck in my head that I have to make right away. I have to know if it is as amazing as I think it will be. This no bake tiramisu cheesecake is one of those recipes. And let me tell you, it does not disappoint. Rich and creamy with the familiar flavors of tiramisu – coffee, coffee liqueur, cocoa and mascarpone, this cheesecake requires no baking and is the perfection fusion of cheesecake and tiramisu. Layered with a graham cracker crust, smooth cheesecake filling and coffee and coffee liqueur soaked ladyfingers, this incredibly delicious cheesecake can be made in advance and is a total crowd pleaser.

Tiramisu wouldn’t be a tiramisu without mascarpone cheese. So in addition to cream cheese, I have added mascarpone to the recipe. To further make this a tiramisu cheesecake, I added coffee and Kahlua (or coffee liqueur of your choice).

Since this cheesecake is a no bake cheesecake, this version gets its lighter texture from whipped cream. Cream cheese, mascarpone, powdered sugar, vanilla, salt, coffee, and coffee liqueur are beaten until silky and smooth. Chill for 30 minutes. Beaten whipped cream is folded into the cream cheese mixture to make a smooth, creamy and rich cheesecake filling. Spoon half of the cheesecake filling to the graham cracker crust.

The cheesecake layer is broken up by a layer of soaked ladyfingers, also found in traditional tiramisu. Ladyfingers will break and dissolve quickly so the cookies only need to be soaked in the coffee/coffee liqueur mixture for about a 1-2 seconds per side. This layer is placed on top of the first layer of cheesecake. Smooth out the remaining cheesecake filling over the top of the ladyfingers and chill for at least 6 hours, preferably overnight. I think it tastes better the second day, after the flavors have gotten to really meld together and it’s super cold.

Before serving, add a layer of freshly whipped cream. I piped mine in little mounds, but you can pile it on any way you like. Sprinkle the whole surface with a dusting of cocoa powder, then immediately serve.

If you make this no bake tiramisu cheesecake, let me know! Drop a comment or tag me on Instagram.

For more cheesecake recipes, check out these posts: 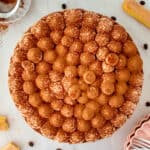 Creamy and decadent no bake tiramisu cheesecake made with mascarpone, coffee, and coffee liqueur, with a layer of coffee and coffee liqueur soaked ladyfinger cookies in between, all on top of a graham cracker crust.
Prep Time30 mins
Chill6 hrs
Total Time6 hrs 30 mins
Course: Dessert
Servings: 8 – 10 servings

No bake tiramisu cheesecake can be made in advance up to two days. Add whipped cream just before serving.