I have been making these overnight cinnamon rolls with brown butter cream cheese frosting, and variations of these rolls for my family for many years. I’ve always sort of viewed cinnamon rolls as a special baked treat reserved for holiday mornings, or for big breakfasts when guests are over, but since we have all been at home these past several weeks, I have been making these often. My kiddos LOVE them. They are crazy delicious. 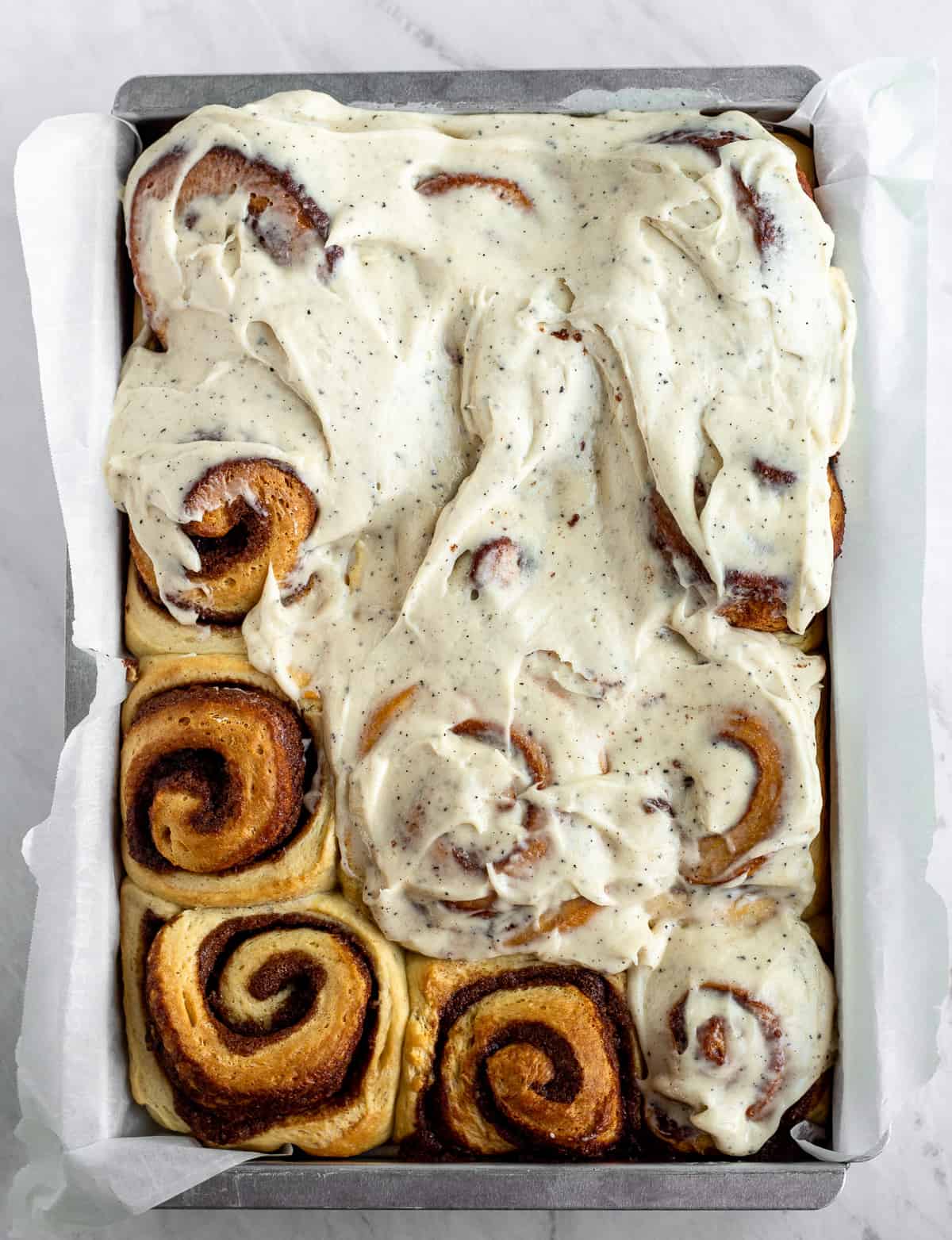 There’s nothing more disappointing than biting into a warm, gooey cinnamon roll only to find that the dough is tough or crumbly. Cinnamon rolls should be soft and fluffy, with a sweet brown sugar cinnamon filling, no skimping on the cinnamon, with a cream cheese frosting that drips into the rolls making those gooey centers that might be the absolute best part of the cinnamon roll.

I use a buttery, soft and fluffy brioche dough for my cinnamon rolls that I adapted from Joanne Chang’s book Flour: Spectacular Recipes from Boston’s Flour Bakery + Cafe.  Brioche is a buttery and tender enriched dough that is perfect for all sorts of sweet and savory shaped and filled breads, buns, rolls, and more. This is my go-to recipe when making any sort of brioche pastries. 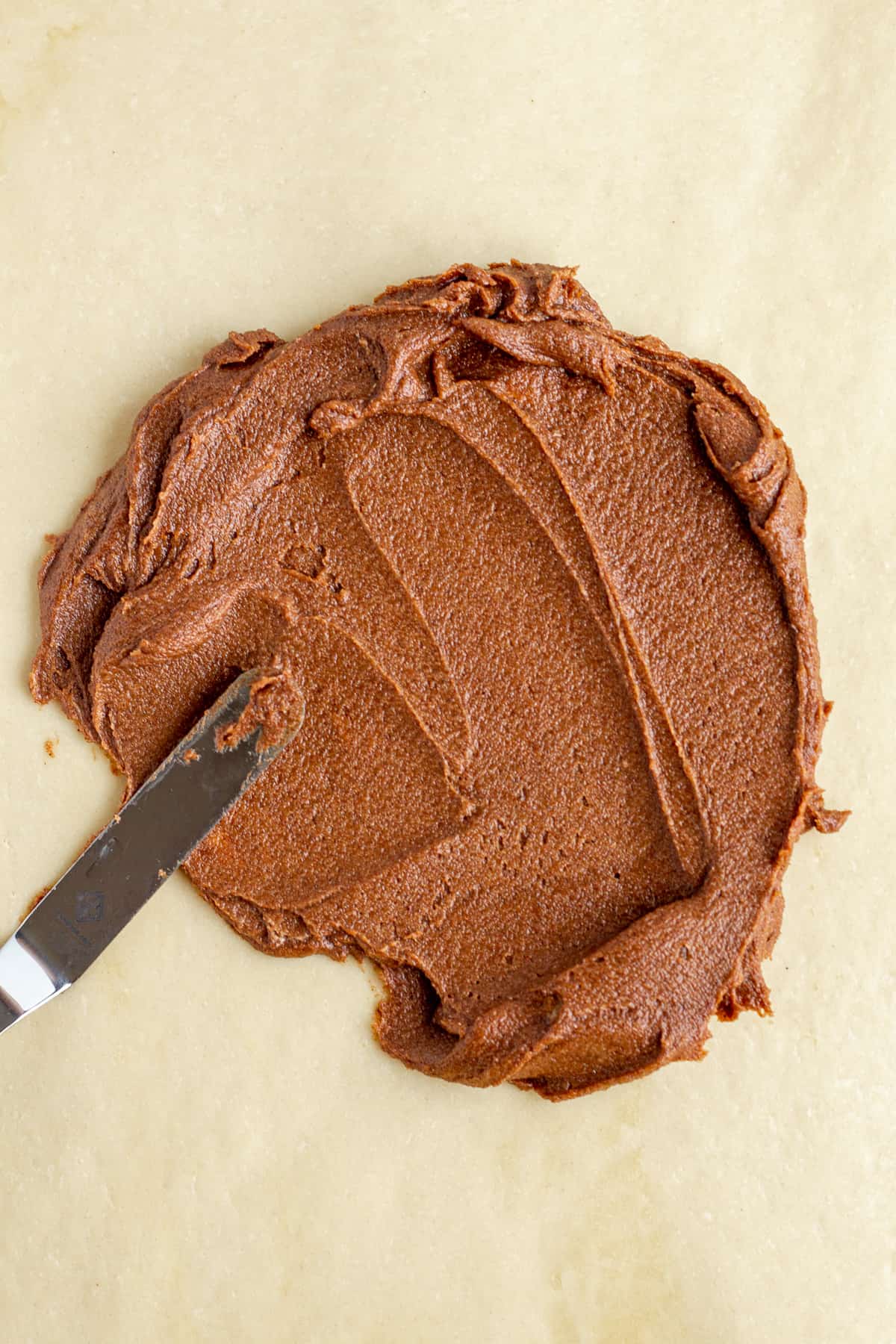 How to make brioche

Brioche is fairly straightforward to make, albeit a bit time consuming due to the mixing and kneading. Luckily, most of the tedious work of making brioche takes place on a stand mixer. I do not recommend making this brioche by hand, or with a hand mixer. It needs a powerful mixer to be able to knead it properly, and it would take substantially longer to knead by hand. Bread flour, all-purpose flour, sugar, salt, yeast, milk and eggs are placed into the bowl of a stand mixer. Use a scale to weigh your ingredients for the best and consistent results, and it’ll be a one bowl wonder dough. 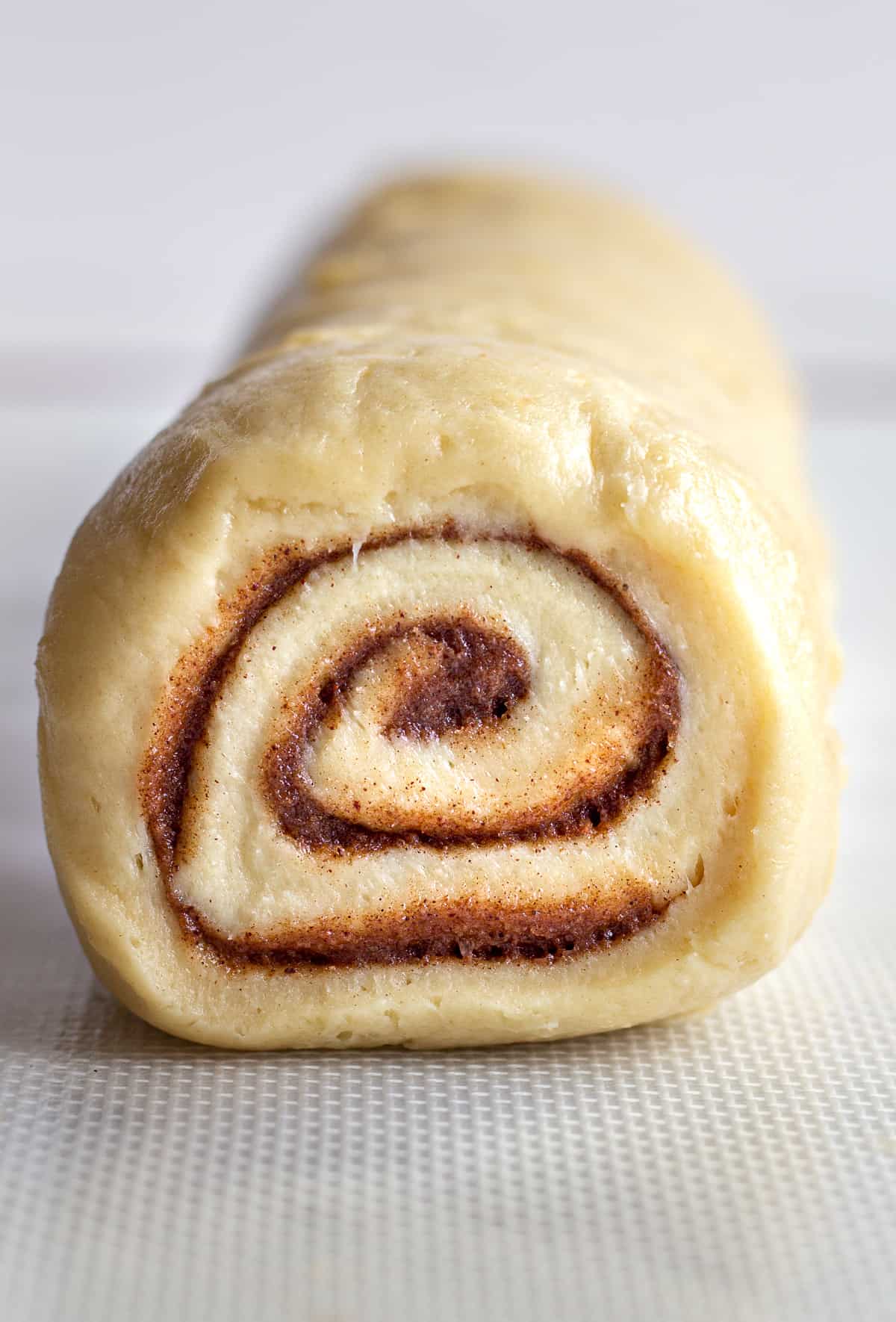 The dough is mixed together for several minutes, and then the softened butter is added. Do not rush these first few steps of mixing before the butter addition. Once the butter is added, gluten formation is slowed down, which is why mixing times are longer for enriched doughs (doughs with a high fat content and contains butter, eggs, etc.) and also why gluten formation needs to occur in these first couple steps. No gluten strands = tough, dense and crumbly rolls. Softened butter is then added a piece at a time, and set to mix for a good amount of time until the dough has pulled away from the bowl, and has mixed into a smooth, shiny and elastic dough. Pop the brioche into the fridge to deepen its flavors and cold proof overnight. 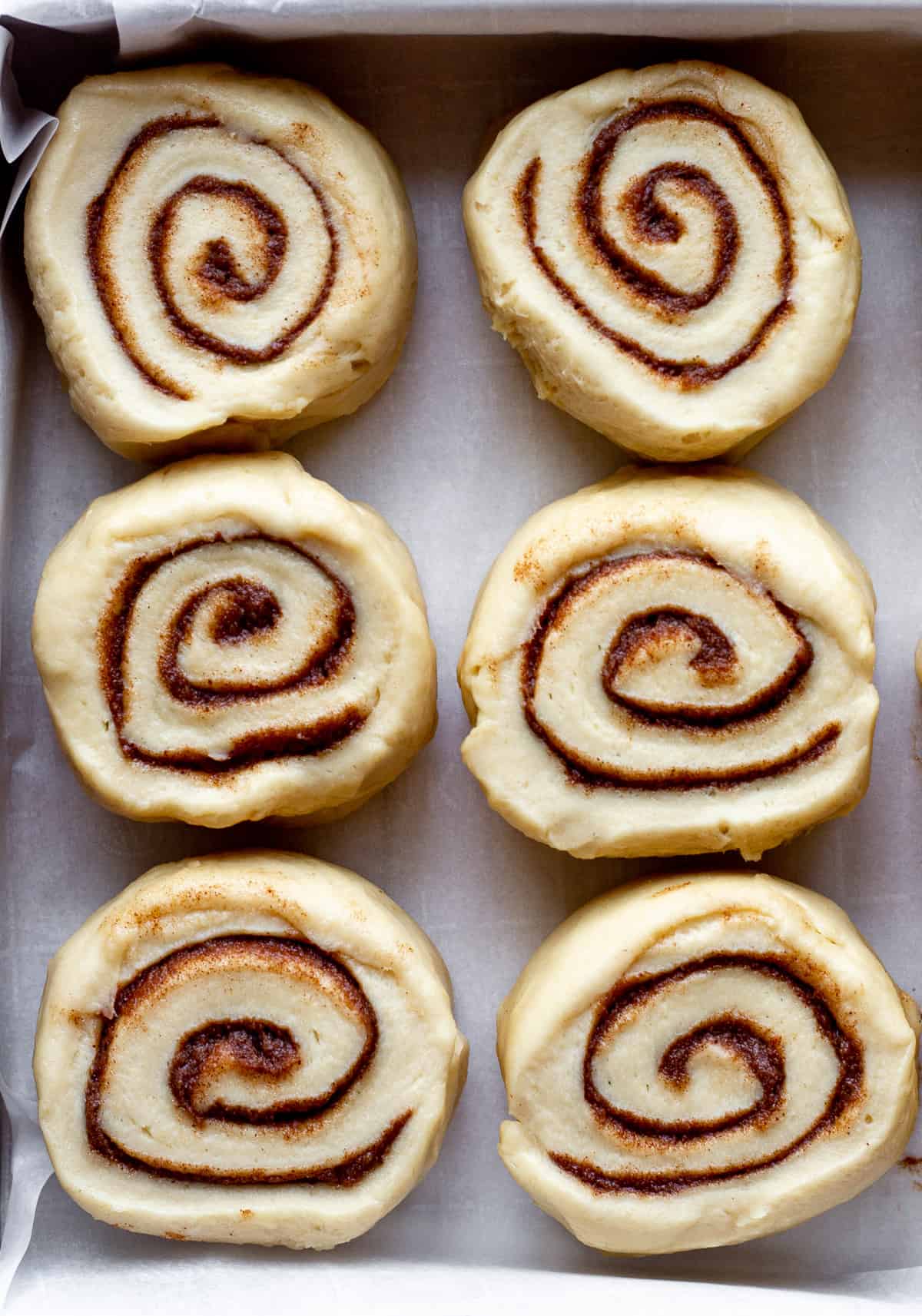 In the morning, remove the brioche from the fridge, then make the filling. Mix the softened butter, cinnamon, brown sugar and salt into a smooth paste. This filling is so good and I think of the amazing cinnamon sugar toast it would make. YUM. But back to the recipe….Roll out the cold dough into a 18×12 rectangle and spread the filling over the dough, leaving about 1/4″ border around the edges. Tightly roll up the dough, cut off 1/4″ off both ends and cut into 12 equal size rolls.

At this point, you can freeze the rolls. I do this often to only bake what we will need. Once you are ready to bake them, thaw them in the refrigerator overnight, then leave them to proof a couple hours before baking. 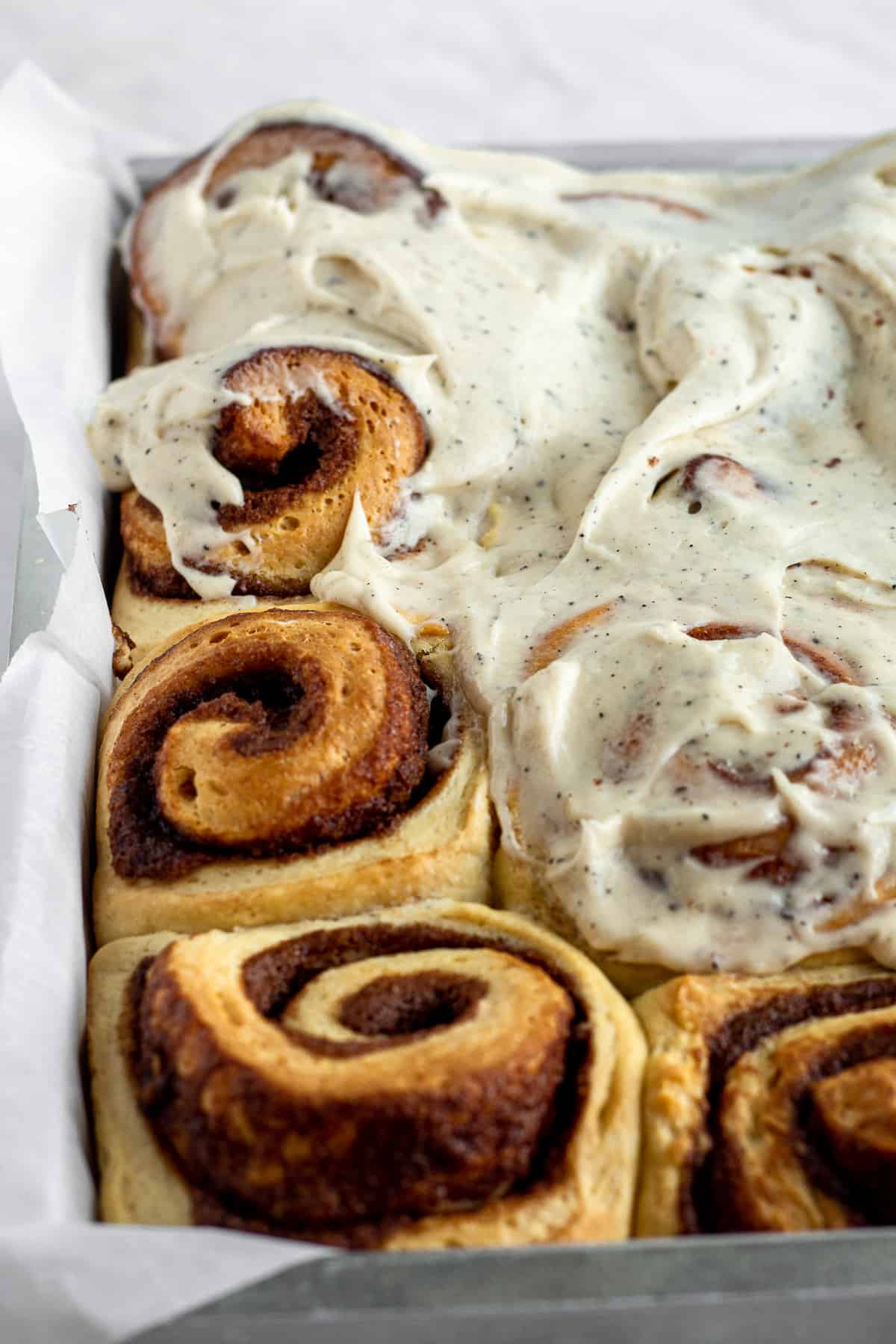 How to make the brown butter cream cheese frosting

Then eat them. It will be hard to eat just one. But, eat at as many as you want. No judgement here. 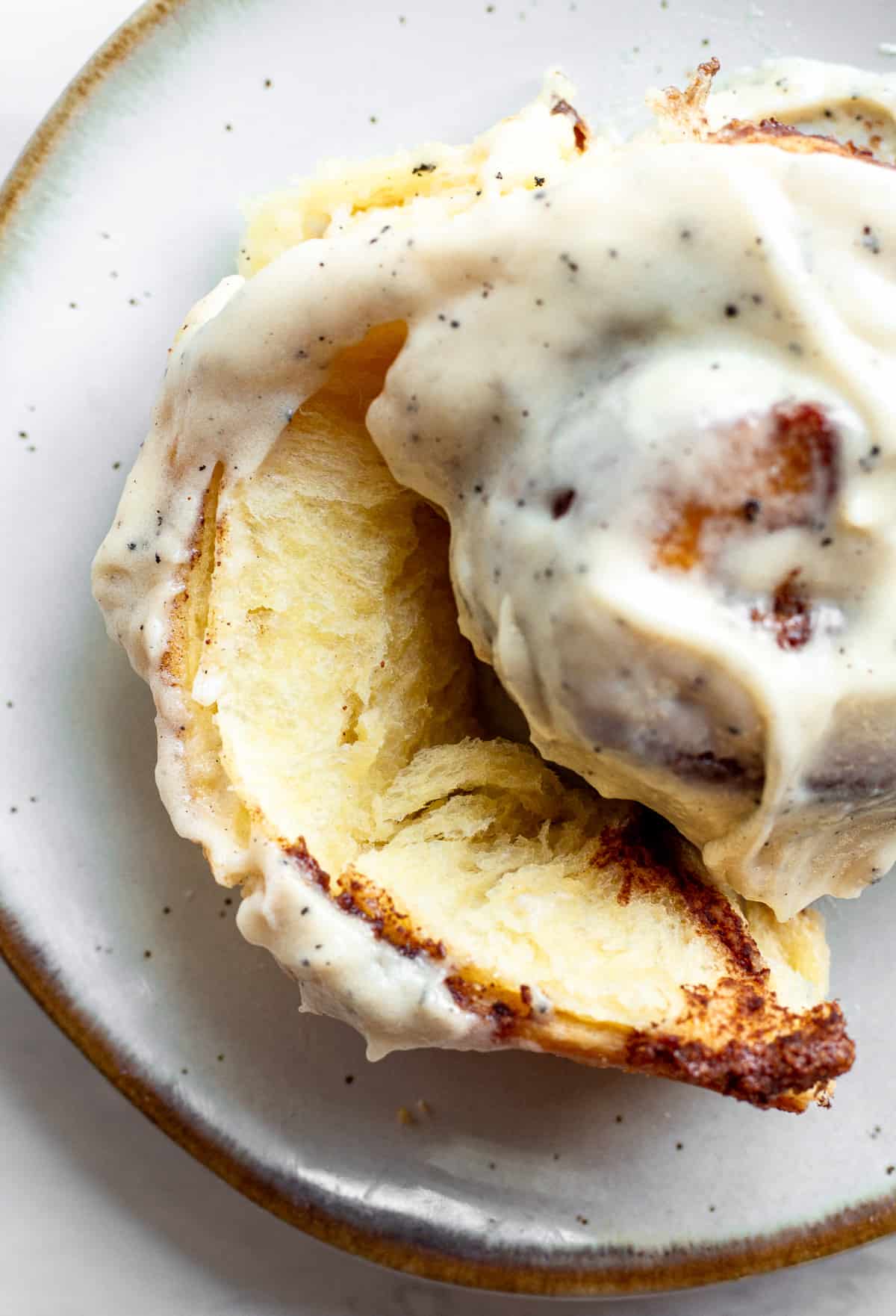 For more breakfast recipes, check these out: 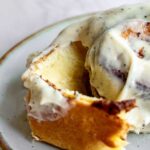