I didn’t realize how amazing mojitos actually were until I was introduced to them in Miami, as THE cocktail to order, during a dinner with friends while attending a cake show. The traditional lime mojitos were amazing, but the passionfruit one, was my absolute favorite. I wouldn’t turn down a pineapple one either. Also delish. Once I returned from Miami, I knew I needed to make my new favorite cocktail into a cupcake. My passionfruit mojito cupcakes have all the traditional flavors of a mojito – lime, rum and mint, with a pop of passionfruit curd and sparkling lime sugar. They’re incredibly delicious and a must bake.

These soft and tender cupcakes are infused with lime zest for a pop of lime flavor. I prefer to use zests rather than juices in my cupcakes as the zest packs the most flavor. These cupcakes are quick and easy to prepare. Room temperature ingredients are key to a perfect cupcake. The egg, egg white, oil, rum and vanilla extract are combined together in bowl and whisked to mix.  The dry ingredients – cake flour, sugar, baking powder and salt – are  mixed together in the bowl of a stand mixer. Room temperature butter is mixed into the dry ingredients until the mixture resembles coarse breadcrumbs. Milk is added just until the flour mixture is moistened, then the batter is whipped for a full 90 seconds. This aerates and stabilizes the batter for fluffy cupcakes.

The remaining milk is mixed in with the egg/oil mixture. The egg/oil mixture is added to the batter in two additions, scraping the bowl after each addition. Be sure to scrape the bowl when noted to make sure the ingredients are being thoroughly incorporated and well combined.

Passionfruit curd. Oh how I love it so. It’s tart and sweet, creamy and thick, and goes so well with the lime, rum and mint. Passionfruit curd is easy to prepare and takes less than 30 minutes to make. You can find frozen passionfruit puree in most stores, which is what I used for this recipe. Egg yolks, an egg, sugar, salt, and passionfruit puree are heated until thickened and creamy. Butter is added to help thicken the curd, add a little bit of richness and also make the curd silky smooth. Once the curd is chilled, it is ready to use.

I once saw someone use a flavored sanding sugar on a cupcake and knew I had to do try it out. It does not disappoint. Don’t skip out on the lime sugar topping as it adds a bit of crunch and another punch of lime. Rubbing the sugar and lime zest together between your fingers releases the oils in the zest, which means mega flavor. Sprinkle the sugar onto the cupcakes after frosting them, and top with fresh mint leaves.

If you make these passionfruit mojito cupcakes, let me know! Drop a comment or tag me on Instagram. I love seeing your bakes and creations. 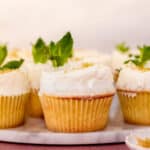 I’m all about the tropical flavors lately, and even though it’s still spring, it feels like summer. It’s been HOT here in the midwest. This mango passionfruit coconut panna cotta tart is tropical in flavor, and served cold. This dessert is perfect for hot summer days.

This mango passionfruit coconut panna cotta tart is fairly simple, with the majority of the work in this recipe is just waiting for the tart shell to bake, the panna cotta to set, and the gelée is set. This tart can be made in advance, or over the course of a couple days . This tart is super creamy from the coconut milk, sweet-tart from the mango and passionfruit purees with a crisp cookie-like crust. It’s super delicious and beautiful.

This sweet tart shell, or a pâte sucrée is tender and crisp, with a slight crumble in texture, similar to a that of a shortbread cookie. It’s the perfect foundation to most any filling, and can be made in a food processor. Check out my post on sweet tart dough for the recipe, and the step by step on how to make this dough.

Panna cotta is an Italian dessert that usually consists of cream, sometimes milk, sugar and vanilla. Gelatin is added to it to make a molded dessert, much like a super creamy jello. In this recipe, I swapped out the cream for coconut milk. The coconut milk still gives it that super creamy and luscious texture that is typical with traditional cream based panna cotta.

Gelée is the French term for what we know as jello. This mango passionfruit gelée is not as stiff nor is it clear like typical jello. This is because for this recipe I used mango and passionfruit purées and not juices. The gelée is poured on top of the panna cotta to set firm up and add a pop of fruity flavor that tastes amazing with the coconut milk.

If you make this mango passionfruit coconut panna cotta tart, let me know! Drop a comment or tag me on Instagram. I love seeing your bakes and creations.

For more tart recipes, check out these posts: 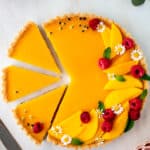