It’s my birthday! So I’m celebrating with funfetti vanilla cupcakes with chocolate fudge frosting. Yellow cake and chocolate frosting is the quintessential birthday cake I grew up with, as so many of us have, and it’s a nostalgic combination I make for birthdays year after year. These funfetti vanilla cupcakes are deliciously soft, moist and full of vanilla flavor. The chocolate fudge frosting is light but rich, super chocolatey and creamy delicious. And we can’t forget, it’s not a true birthday cupcake unless there are lots and lots of sprinkles! 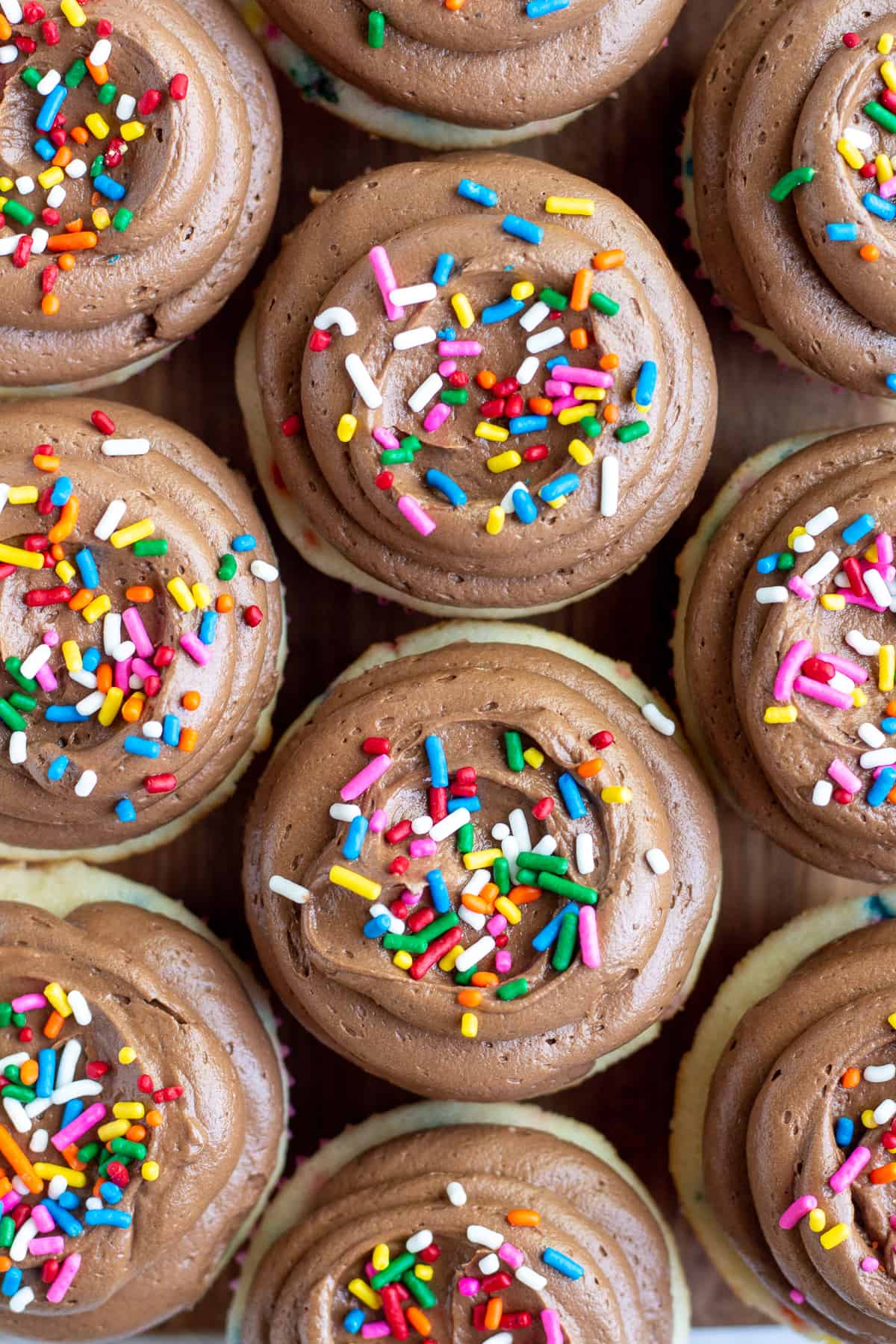 How to make funfetti cupcakes

These cupcakes are quick and easy to prepare. They use my favorite mixing methods, the reverse creaming method. Check out my Strawberry Rose Buttermilk Cake for more information on the reverse creaming method. Room temperature ingredients are key to a perfect cupcake. The egg, egg white, oil and vanilla bean paste are combined together in bowl and lightly beaten, to mix.  The dry ingredients – cake flour, sugar, baking powder and salt – are  mixed together in the bowl of a stand mixer. Room temperature butter is mixed into the dry ingredients until the mixture resembles coarse breadcrumbs. The milk is added just until the flour mixture is moistened, then the batter is whipped for a full 90 seconds. This aerates and stabilizes the batter for fluffy cupcakes.

The remaining milk is mixed in with the egg/oil mixture. The egg/oil mixture is added to the batter in two additions, scraping the bowl after each addition. Be sure to scrape the bowl when noted to make sure the ingredients are being thoroughly incorporated. Fold in the sprinkles of your choice. Divide the batter between the cupcake liners, filling about 2/3 of the way full. The cupcakes are baked a slightly lower temperature at 325F, so that bottoms and sides of the cupcakes don’t get over baked while the middle is still baking. Do not over bake. 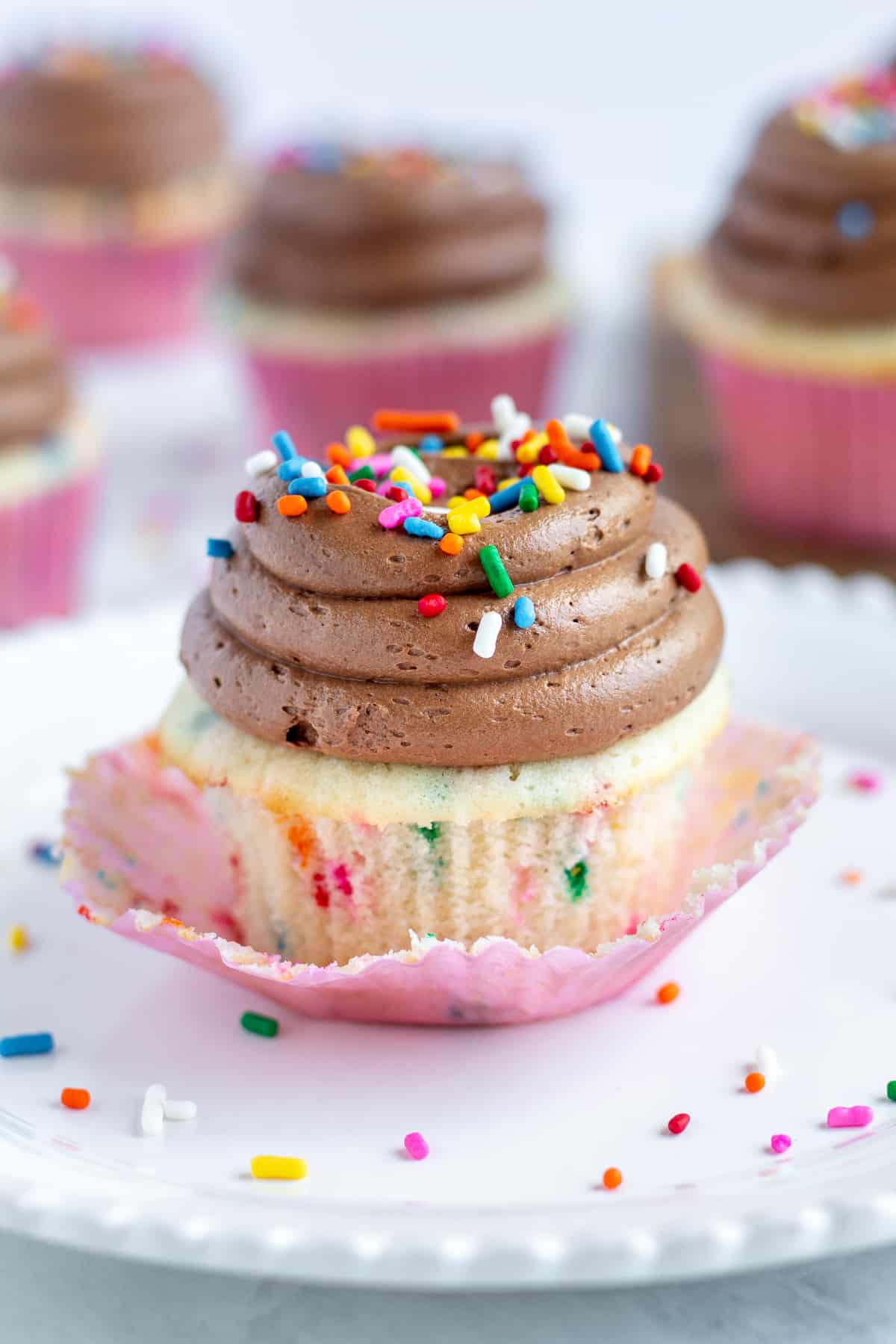 This cupcake recipe is super versatile. They’re soft and fluffy, but still stable enough for a variety of fillings and frostings. The baked cupcakes will keep for 3 days at room temperature in an airtight container. I do not recommend refrigerating these, as I don’ t recommend refrigerating scratch cupcakes in general. Unless they’re individually wrapped, I find that they dry out a bit to much.

How to make the chocolate fudge frosting 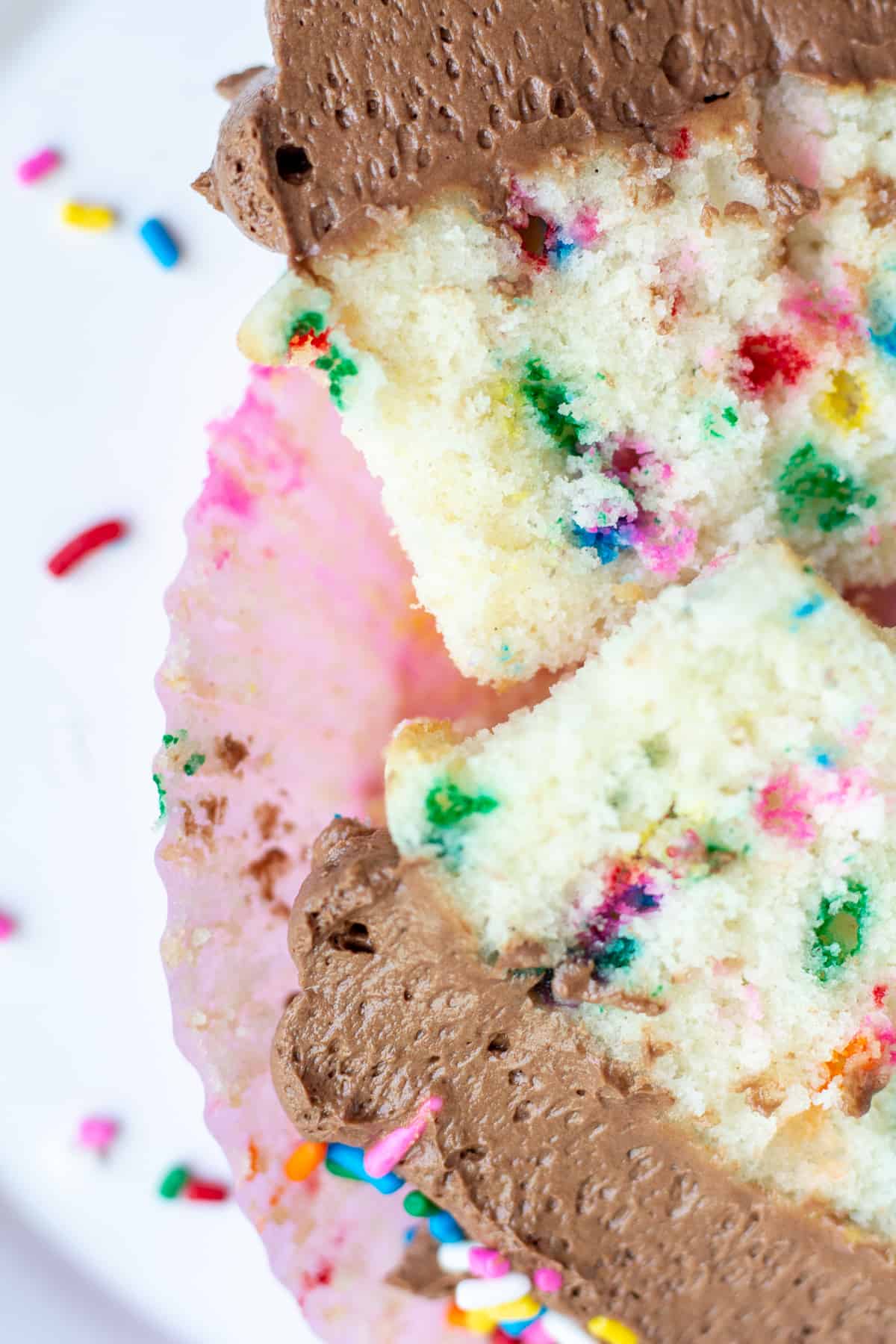 I like to use bittersweet chocolate in my frosting to offset the sweetness from the confectioner’s sugar. Choose a quality bittersweet chocolate that you like, because the chocolate flavor is front and center. Melt the chocolate in the microwave or over a double broiler until the chocolate is melted and smooth, and let it cool to room temperature. While the chocolate is cooling, whip the butter and the confectioner’s sugar until super light and creamy. Add in the cooled chocolate, and beat again until combined. Add in the vanilla, milk and salt and beat on medium speed until light, creamy and thoroughly mixed. I like to whip the frosting for 3-5 minutes or so to get it really light and fluffy. Spread or pipe the buttercream onto the cooled cupcakes and top with your favorite sprinkles. Enjoy! 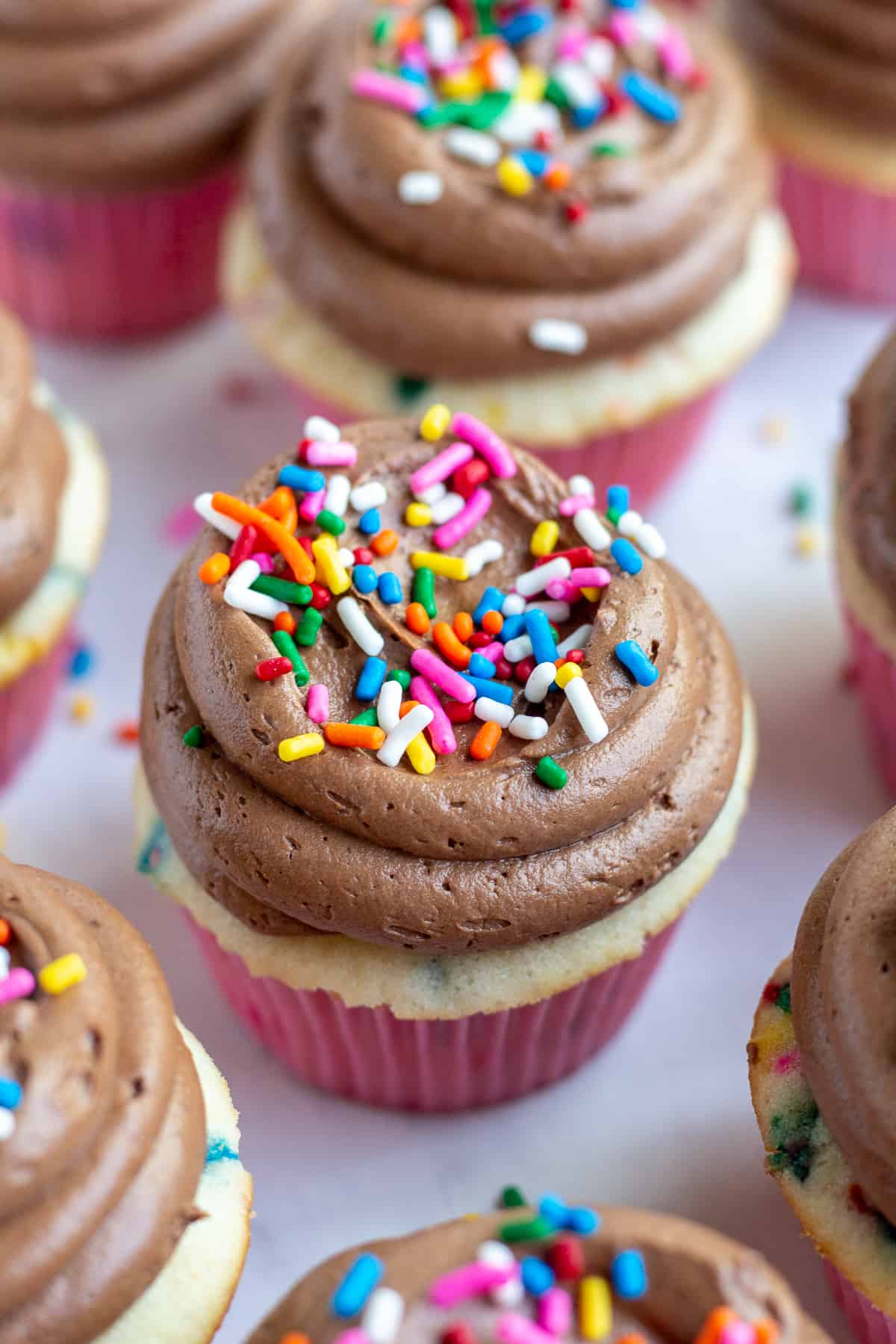 For more cake and cupcake recipes, check out these posts: 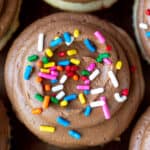 Baked and frosted cupcakes can be stored for up to 3 days at room temperature in an airtight container.

Hi, I’m Ashley! Welcome to the The Little Vintage Baking Company – where you will find recipes, tutorials, resources and more for the baker, cake decorator and baking business owner.
Click here to learn more!