Oh, these macarons. These are definitely a must add to your baking list. They're the best of two amazing French desserts - macarons and crème brûlée. My crème brûlée macarons are filled with rich and silky vanilla bean pastry cream and custardy German buttercream sandwiched inside crisp and chewy vanilla bean macaron shells. Then they're topped with sugar and torched until crispy and caramelized. Seriously, these are so, so good.

German buttercream is a custard based buttercream made with pastry cream, butter, a little bit of confectioner's sugar and flavoring. Prepared pastry cream is added to whipped butter to create a rich and silky buttercream that's not too sweet, with a texture that is similar to a meringue style buttercream. I love this buttercream for these macarons but it also makes a fantastic cake filling.

While the macaron shells cool, make the buttercream. Beat the softened butter until thick, pale and fluffy on high speed for about 5 minutes. Beat in the confectioner's sugar. Add the pastry cream a tablespoon at a time. After the pastry cream has been added, beat for 2-3 minutes until smooth and fluffy.

Pipe a ring of buttercream around the outside of half the baked and cooled mac shells. Spoon ½ teaspoon of pastry cream into the center. Place a shell on top of the filling, pushing down gently to push the filling to the edges. 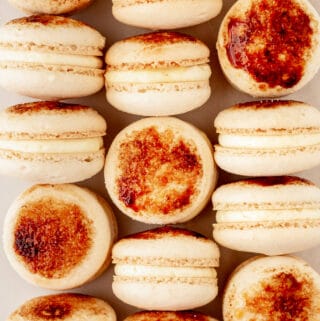 Tried this recipe?Let us know how it was!
« Easy Watercolor Flowers Cake Tutorial
Malted Funfetti Cake with Strawberry Buttercream and Cookie Crumble »