No churn ice creams are super easy to make and super convenient as they don’t require an ice cream machine. Homemade ice cream is takes very little effort and are far more yummy than most store bought varieties. My London Fog no-churn ice cream is infused with lavender Earl Grey tea and vanilla beans with chunks of scratch made honey shortbread pieces. Have your tea and biscuits all in one with this rich, creamy and silky ice cream.

What is a London Fog?

A London Fog is one of my favorite coffee shop drinks. Often called an Earl Grey Latte, this drink is made with Earl Grey tea, steamed milk and vanilla syrup. Make it a London Smog, or Dirty London Fog by adding a shot of espresso. – my favorite way to enjoy the drink. Earl Grey tea is a black tea that is primarily blended with the flavor of bergamot, but you can find different varieties, such as the tea I used for this recipe, which has the addition of lavender to it. You can use any variety of Earl Grey or Lady Grey (Earl Grey with the addition of blue cornflowers) tea for this recipe.

Simple, buttery, sweet and addictive, honey shortbread, this honey shortbread recipe is so, so good on its own, you might want to double the recipe just to snack on it. The shortbread has all the typical ingredients – flour, sugar, butter and a pinch of salt. It is baked until golden brown, and while still warm, honey is brushed over the top and sprinkled with flaky salt. The honey melts into the shortbread and the salt gives it that sweet and salty flavor that makes these shortbread so, so good.

How to make London Fog no churn ice cream

Only a few ingredients are needed to make this ice cream – heavy cream, sweetened condensed milk, Earl Grey tea and vanilla bean paste. Steeping the tea in the cream will infuse the cream with the flavor of Earl Grey. I used 5 tea bags to get a powerful Earl Grey flavor. The tea bags and cream are heated until just simmering. Off the heat, allow the tea to steep in the cream for 5-10 minutes . When removing the tea bags from the cream, be sure to squeeze out as much liquid as possible to get the most flavor. The cream needs to be chilled completely before being whipped for the ice cream base.

If you make this London Fog no churn ice cream with honey shortbread, let me know! Drop a comment or tag me on Instagram. I love seeing your creations.

For more ice cream recipes, check out these posts: 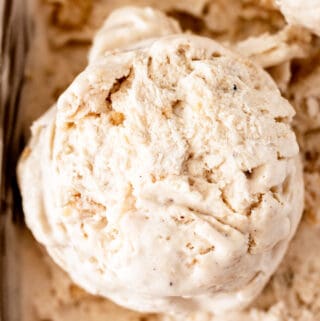 Steep and infuse the cream.

Tried this recipe?Let us know how it was!
Previous Post: « Coconut Lime Crumble Cake
Next Post: Lemon Meringue Cheesecake »