It wasn't until I read Christina Tosi's, Momofuku Milk Bar: A Cookbook, nearly a decade ago, that I learned about cereal milk. The idea of infusing milk with cereal is the perfect way to infuse familiar cereal flavors into baked goods. These Fruity Pebble Cupcakes are inspired by the cakes in that book, and also by my littlest, who came up with the idea of these cupcakes for her birthday. These Fruity Pebble cupcakes are tender, fluffy and moist, infused with Fruity Pebbles flavor, filled with strawberry jam and topped with light and fluffy whipped vanilla Fruity Pebbles buttercream.

Steeping the milk used in both the cupcakes and the buttercream with the cereal will infuse the milk with all that familiar Fruity Pebbles flavor. Combine the cereal and the milk and let it sit for 45-60 minutes for the milk to absorb the flavor from the cereal. The milk will change to a light orange color. Pour the milk/cereal mixture into a sieve set over a measuring cup, and with the back of a spoon, press on the cereal left in the sieve to get as much of the cereal milk out as possible for optimal flavor.

How to make Fruity Pebbles cupcakes

These cupcakes are quick and easy to prepare. Room temperature ingredients are key to a perfect cupcake. The egg, egg white, oil and vanilla extract are combined together in bowl and whisked to mix.  The dry ingredients – cake flour, sugar, baking powder and salt – are  mixed together in the bowl of a stand mixer. Room temperature butter is mixed into the dry ingredients until the mixture resembles coarse breadcrumbs. The cereal milk is added just until the flour mixture is moistened, then the batter is whipped for a full 90 seconds. This aerates and stabilizes the batter for fluffy cupcakes.

The remaining milk is mixed in with the egg/oil mixture. The egg/oil mixture is added to the batter in two additions, scraping the bowl after each addition. Be sure to scrape the bowl when noted to make sure the ingredients are being thoroughly incorporated.

Once the cupcakes are completely cool, assemble the cupcakes. Using a small paring knife, at an angle, cut a cone out of the center of the cupcake, about halfway down the cupcake. Cut the cone off of the removed piece to make a lid that will sit on top of the filling. Fill the cupcakes with a heaping teaspoon of strawberry jam and place the lid on top. Alternatively, you can use a cupcake corer. This is the one I use.

Pipe or spread the filled cupcakes with buttercream. Sprinkle the top with some Fruity Pebbles cereal.

If you make these Fruity Pebble Cupcakes, let me know! Drop a comment or tag me on Instagram. I love seeing your creations. 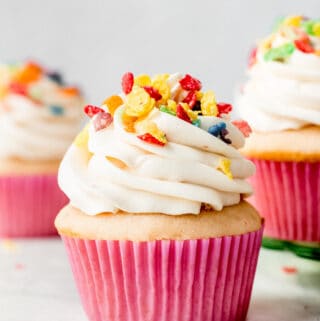