I am all about cake for breakfast. Even better is breakfast as cake. My maple bacon blueberry French toast cupcakes are the best flavors of breakfast. Filled with a jammy blueberry filling, these French toast cupcakes are lightly spiced with cinnamon and nutmeg and topped with sweet and buttery maple Swiss meringue buttercream, fresh blueberries and salty bacon crumbles. All that is missing is a cup of coffee. Eat them for breakfast. Eat them for dessert. They’re super yummy for anytime of the day.

In addition to the usual butter, milk, eggs that contribute to making French toast, these cupcakes are also lightly spiced with cinnamon and nutmeg. The nutmeg is the secret to making these cupcakes taste like French toast. So, so good. This recipe uses the reverse creaming method (you can refer to this post for more info), which creates a soft and fluffy cupcake with a tight crumb.

This blueberry filling is so good on so many things. When I make it, I almost always double it, so I can use it on pancakes or ice cream. You can use either fresh or frozen blueberries for this recipe. The blueberries are cooked down with a little bit of sugar and mashed to release the juices. The mixture is reduced and thickened. Lemon juice and cornstarch are combined to make a slurry that is whisked into the blueberry mixture to thicken it. Cool the mixture before filling the cupcakes.

My maple buttercream is made using both maple syrup and sugar for the meringue base. I like to add a small amount of maple extract to get more of that pancake syrup flavor, but you can totally omit it. The maple syrup definitely shines in this buttercream. For a comprehensive guide on Swiss meringue buttercream, check out this post.

Once the cupcakes and blueberry filling are cooled completely, assemble the cupcakes. Using a small paring knife, at an angle, cut a cone out of the center of the cupcake, about halfway down the cupcake. Cut the cone off of the removed piece to make a lid that will sit on top of the filling. Fill the cupcakes with a heaping teaspoon of the blueberry filling and place the lid on top. Alternatively, you can use a cupcake corer. This is the one I use.

Pipe or frost the filled cupcakes with the maple Swiss meringue buttercream. Top with the crumbled bacon and fresh blueberries.

If you make these maple bacon blueberry French toast cupcakes, let me know! Drop a comment or tag me on Instagram. I love seeing your creations. 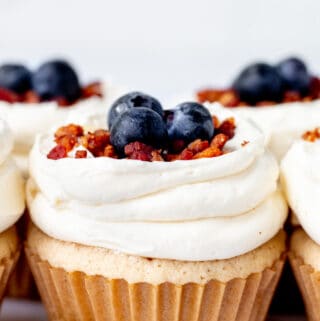