I've been wanting to post this donut recipe for quite a while. I actually came up with the recipe for these back in July, and I've been (im)patiently waiting to share them with you. I wanted to create a donut that's old fashioned, comforting and was abundantly Fall. So when I was planning the recipe for these mulled apple cider cake donuts, I decided to go the traditional route of frying them. They absolutely did not disappoint. These donuts are crispy on the outside, tender and cakey on the inside and made with apple cider, mulling spices like cinnamon, allspice, cloves and orange, and rolled in cinnamon sugar. Perfect with a cup of coffee on a cool autumn morning.

What are mulling spices?

Apple cider is delicious all on it's own, but steep some mulling spices in it, and it's next level amazing. Mulling spices are simply a combination of spices, usually whole, that are used to add flavor to many seasonal autumn and winter drinks, such as mulled wine, apple cider, or wassail. Any combination of cinnamon, cloves, allspice, nutmeg, cardamom or star anise can be considered mulling spices. Additionally, fruit is also used as well as a flavoring with mulling spices, such as orange, lemon or cranberries.

I prefer using whole spices - cinnamon sticks, allspice berries and whole cloves to steep in the apple cider. They provide more of a subtle and pure flavor, and I don't like how much of the ground spices are left behind in the cider. 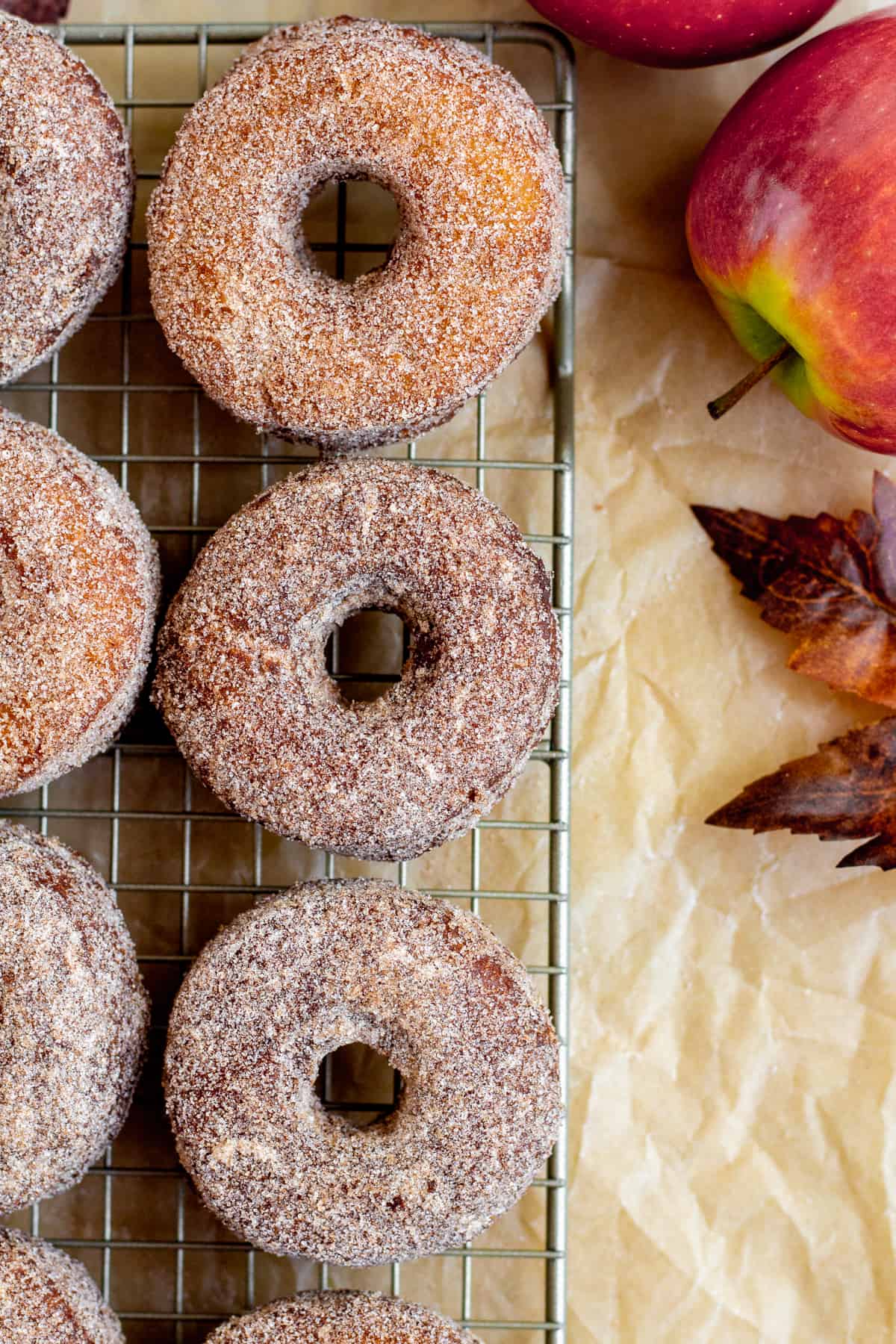 Choosing an apple cider and steeping the spices

When choosing an apple cider, choose a fresh one, usually found in the produce area or seasonal section of your grocery store. You don't want to use the one that apple juice from the juice aisle. The best kind of apple cider is opaque with little apple bits at the bottom. This kind of apple cider is more flavorful and has a more concentrated and true apple flavor. Also, note that this is non-alcoholic apple cider.

To get maximum apple flavor, a cinnamon stick, cloves, allspice berries and some orange slices, are steeped in two cups of apple cider that simmers on the stove until the cider is reduced to ½ cup. The spices and orange slices are removed and the cider cools to room temperature. 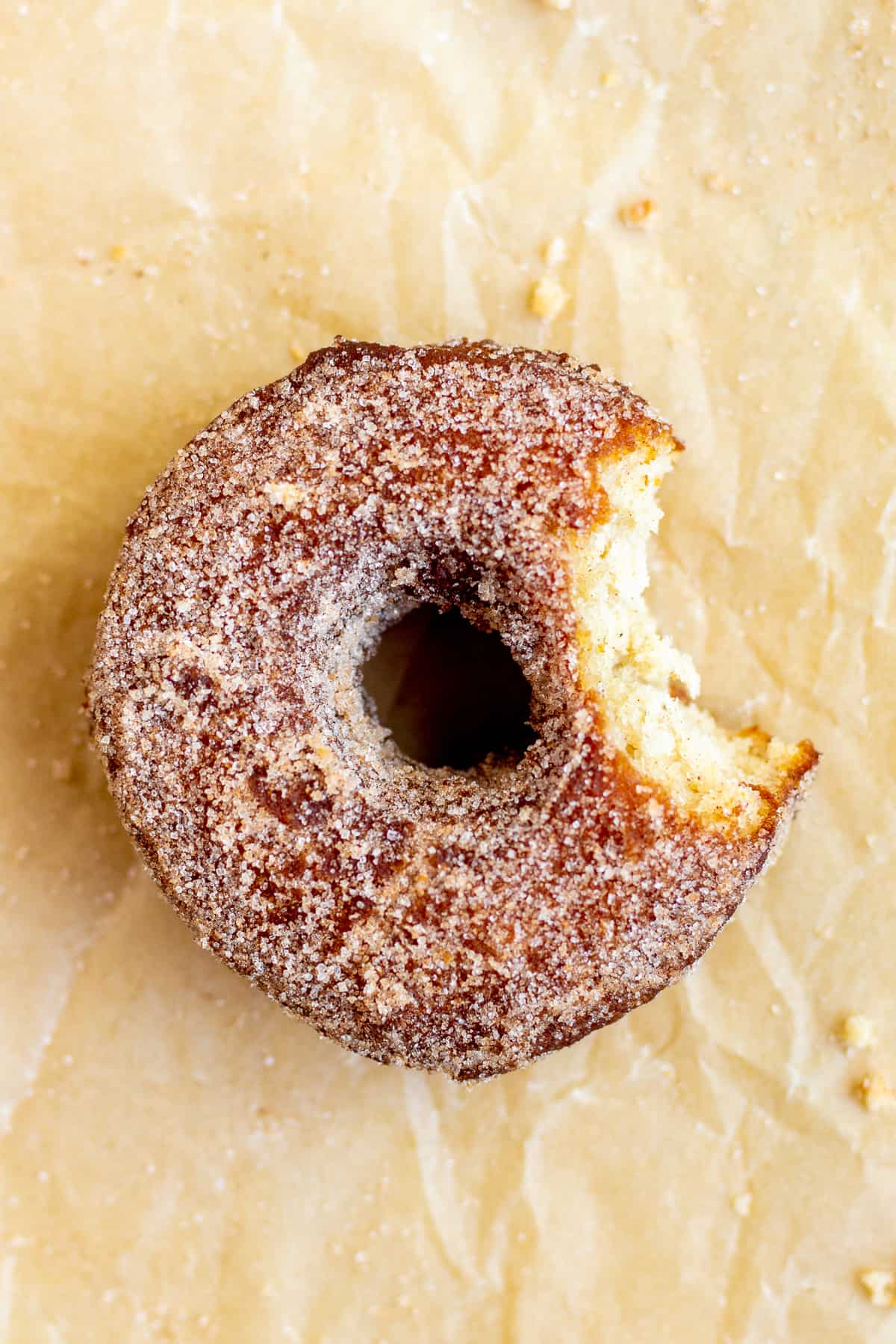 How to make the donuts

In a large bowl, combine the flour, sugar, salt, baking powder and spices. In a measuring cup, add the milk, melted butter, vanilla, egg and the warm apple cider. Create a well in the center of the flour mixture, then pour in the milk/cider mixture. Stir until it's well mixed, and scoop the dough out onto a parchment lined sheet pan or non-stick baking mat. Give the dough a few gentle kneads to make sure the dough is sticking together. It will look pretty rough and craggy, like biscuit or pie dough. Pat the dough into a disc shape, between ⅜" to ½". Cover with plastic wrap and let it rest in the fridge for an hour, or the freezer for 15 minutes.

Meanwhile, place 6 cups of vegetable, canola or peanut oil in a heavy bottom pot. I use my dutch oven for frying, as it is sturdy and conducts heat well. Clip a deep fryer thermometer to the side, making sure the glass isn't touching the bottom of the pot. I misplaced my thermometer, and used a candy thermometer that worked just as well. You can find the equipment I use under the store tab in my website menu.

Heat the oil over medium heat until the oil reaches 370-375F. This will take some time. As the oil heats up, cut out the donuts. You can make any size you want, but for a standard size donut, use a 2 ½" to 3" round cutter, or biscuit cutter. For the donut holes, you can use a 1 ½" round cutter, or as my mom used to do, use a floured soda bottle cap to cut out the centers. Combine the sugar and cinnamon together and whisk to combine. This will be used to roll the donuts in once they're fried.

Once the oil is to temperature, fry two or three donuts at a time, about a minute/minute and a half on each side, taking care to not overfill the pot with donuts so the oil temperature doesn't drop. I used a stainless steel frying spider, but you can also use the end of a wooden spoon to flip the donuts and remove from the fryer. Be super careful not to drop the donuts to avoid splashing crazy hot oil all over you.

Let the donuts drip off excess oil on a paper towel lined cooling rack for 20 seconds before rolling them in the cinnamon sugar mixture. 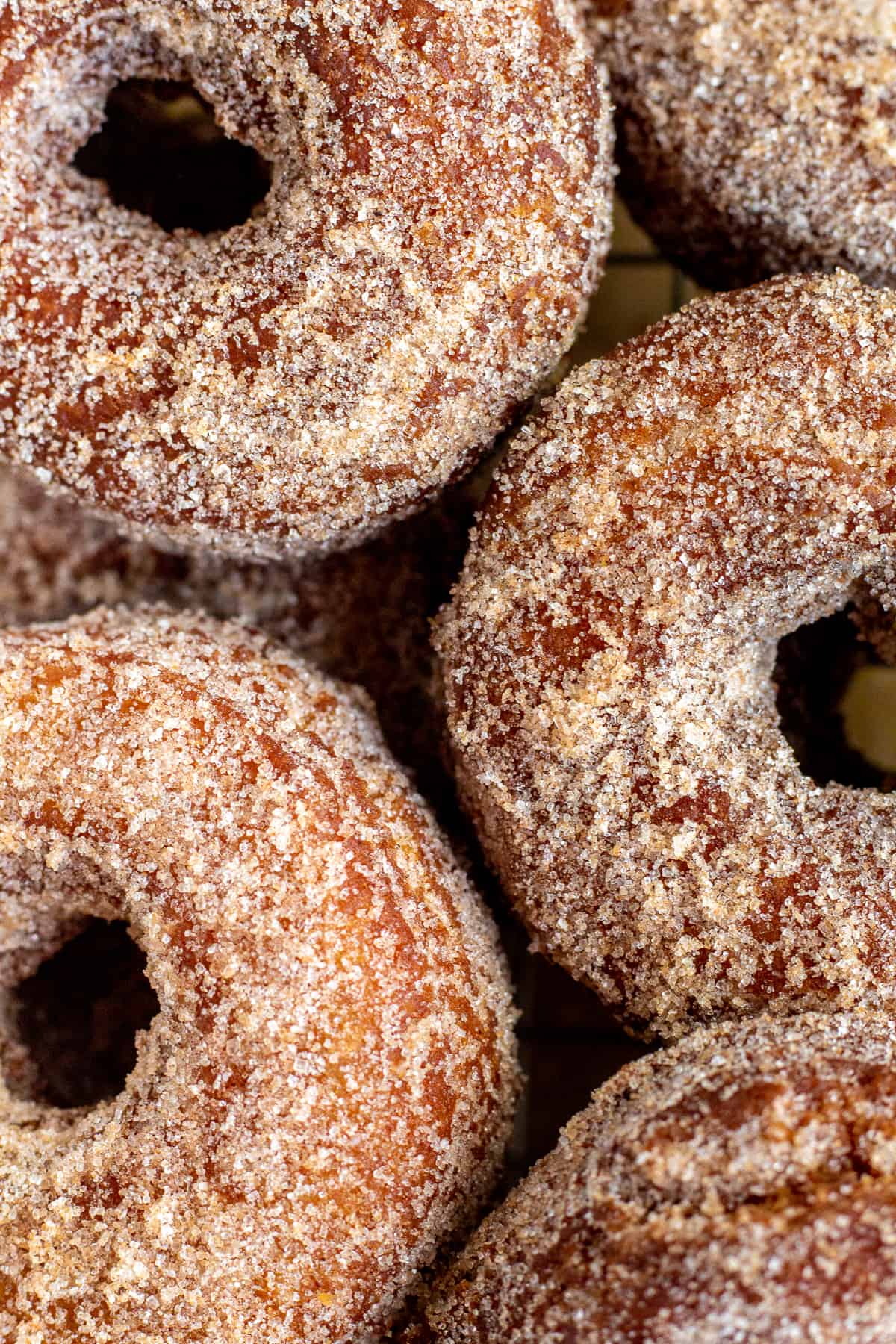 Serve the donuts warm or at room temperature with your favorite warm beverage.

I hope that you enjoy these mulled apple cider cake donuts as much as I do! If you make them, let me know and leave a comment or tag me on Instagram.

For more autumn recipes, check out these posts: 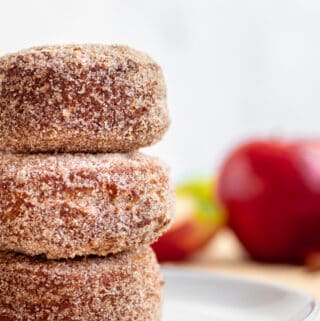 These donuts are crispy on the outside, tender and cakey on the inside and made with apple cider, mulling spices like cinnamon, allspice, cloves and orange, and rolled in cinnamon sugar.
No ratings yet
Print Recipe Pin Recipe
Servings12 donuts
Prep Time20 mins
Chilling1 hr
Cook Time10 mins
Total Time1 hr 30 mins

The donuts can be stored for up to four or five days in an airtight container. Note that the outside will soften a bit and won't be as crispy.
Tried this recipe?Let us know how it was!
« Earl Grey Cake with Honey Buttercream and Blackberry Caramel
Black Cocoa Sugar Cookies + Decorated Pumpkins Tutorial »