[This post is written in partnership with Bialetti. All text and opinions are 100% mine. Thank you for supporting brands that help me and my business grow!]

Hello, friends! Is it officially considered fall when pumpkin spice starts popping up in coffee shops?  As much as I love fall, I'm having a hard time dealing with the fact that summer is nearly over. But I won't pretend that I'm not excited about hauling out the slow cooker and making ALL the soups. And fall baking, also love it. Pumpkins, apples, warm spices - comfort baking at its best. I've got so many fab recipes and tutorials lined up for this fall season and can't wait to share them all with you. 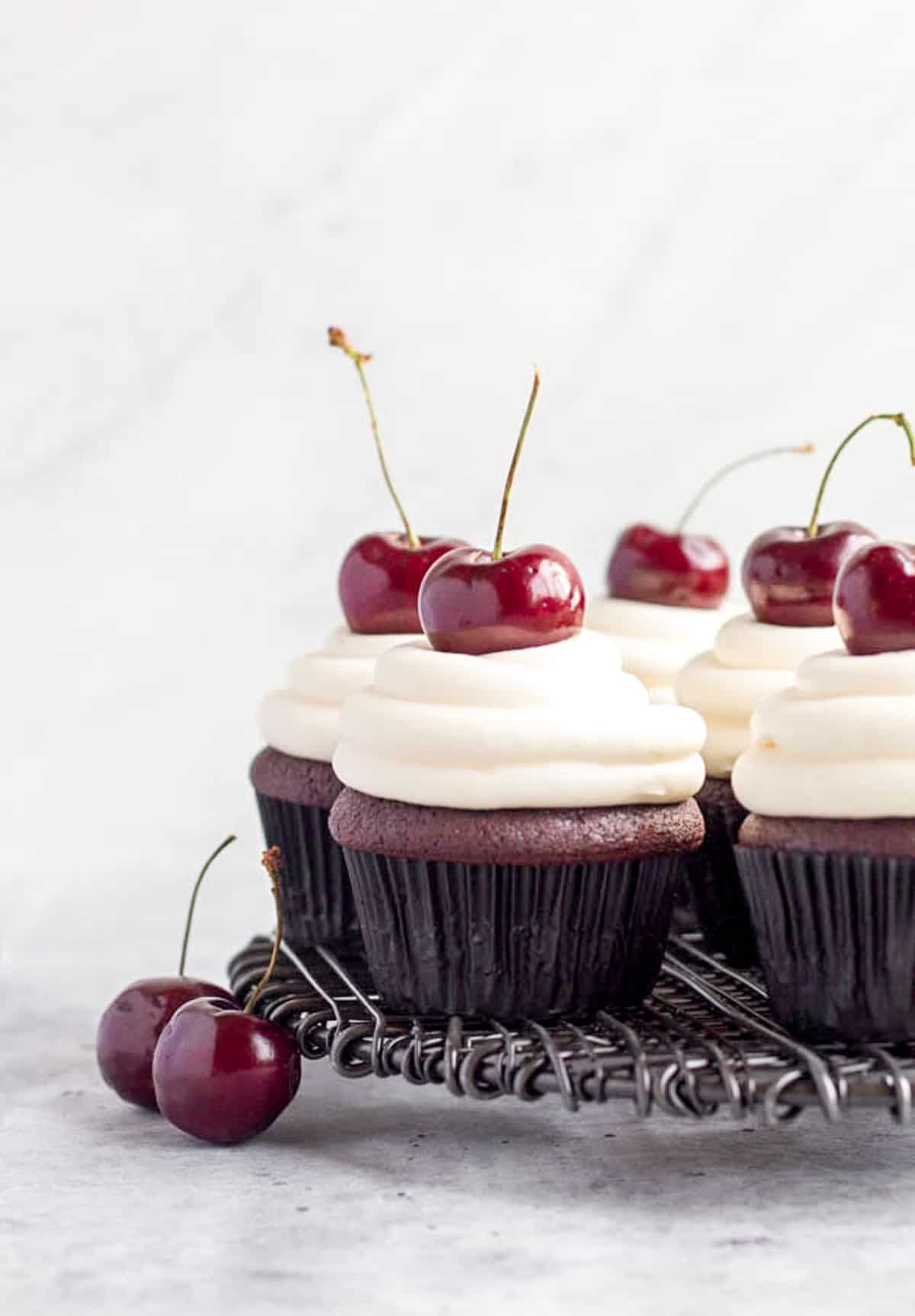 I couldn't possibly finish out summer baking on the blog without posting a cherry recipe. My littlest loves cherries so we've had a steady supply on hand since they were first available. These black forest cupcakes are the perfect way to use up the last of those cherries. And what better to pair with cherries than chocolate. These chocolate cupcakes are moist and fluffy, filled with homemade cherry filling and topped with a tangy whipped cream cheese buttercream frosting. This is my go-to cream cheese buttercream frosting I use for my wedding cakes.

I'll admit, these black forest cupcakes aren't authentically black forest in the traditional sense. Both feature a rich chocolate cake base, but the cherry filling differs a bit. Traditional black forest cake has that unmistakable flavor of Kirsch, or cherry liquor. I chose to leave it out and flavored my cherry filling with vanilla and a hint of almond. I left it out because I don't keep Kirsch on hand and didn't feel like it was worth buying a bottle of Kirsch for this one recipe. It would never be used except for this recipe. However, you can add Kirsch to the filling if you have it and wish to use it. I also used sweet cherries for my filling in place of the traditional sour cherries. Traditional black forest cake is filled and covered with a light whipped cream. I opted for a whipped cream cheese buttercream frosting because the tanginess of the cream cheese is fabulous with the cherries and the chocolate. 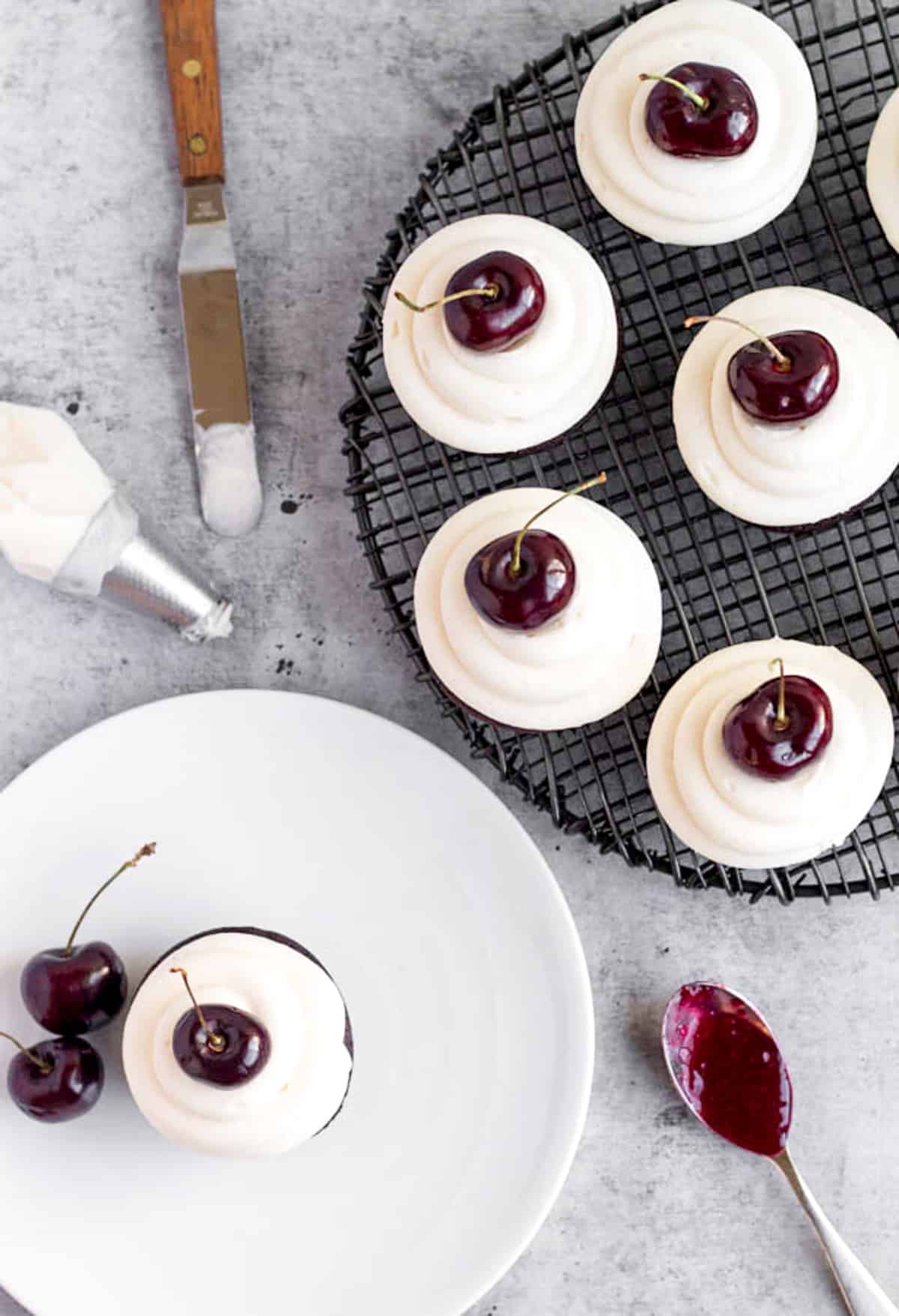 This chocolate cupcake recipe is one I've been using for years and it's pretty much the *perfect* chocolate cupcake. It's fantastically chocolate-y with a tight but fluffy crumb. Be sure to use a good quality dutch processed cocoa here. Not only will the flavor be highlighted, but also good quality cocoa powder has a higher fat content (ie: adds moistness to the cupcake).

The only liquid in this chocolate cupcake recipe is coffee. I used Bialetti's Moka Express to brew the coffee for my cupcakes. I don't own an espresso machine, so the Moka Express is a fast and easy way for me to make a quality espresso drink without having to hit the local coffee shop drive-through. Bialetti's Milano coffee blend is my favorite to drink - it's lighter, more floral and more delicate than the Bialetti Napoli blend that I used for these cupcakes. I opted to use a more robust and dark roast to really enhance the chocolate in the cupcakes and I wanted the natural roasted and cocoa aroma of the coffee to really shine through. 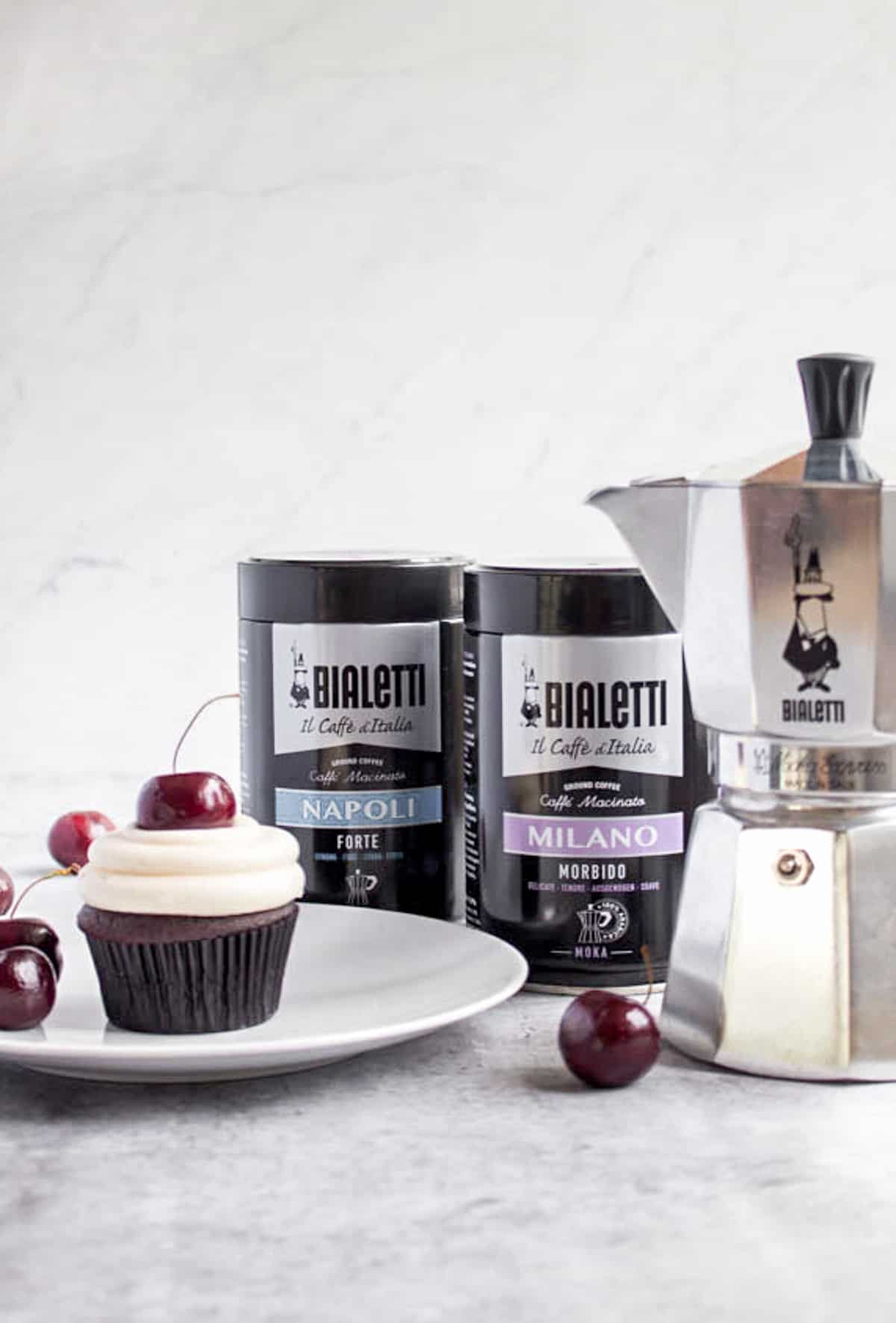 The coffee and cocoa powder are mixed together to "bloom" the cocoa powder. Combining the cocoa powder with a liquid allows the cocoa powder to dissolve and essentially release it's flavor. Pretty much means you're unleashing it's ultimate chocolate-y potential. The cupcakes are made by combining sugar and butter in a saucepan and heating just until melted. The mixture is then poured into the bowl of a stand mixer and beaten until room temperature. Eggs and vanilla are added, followed by the chocolate mixture and finished by alternating between sour cream and the flour mixture. When baked they'll be perfectly domed, moist and flavorful chocolate cupcakes.

The cherry filling for these black forest cupcakes is super easy and fast to make. Combine all the ingredients into a saucepan. I use a potato masher to break up the cherries a bit more and get them to release some of their juices once they start to cook down a bit. Let the cherry mixture simmer until thickened, add in extracts and let it cool completely before using. Easy peasy. The cherry filling can be made in advance and refrigerated for up to a week. 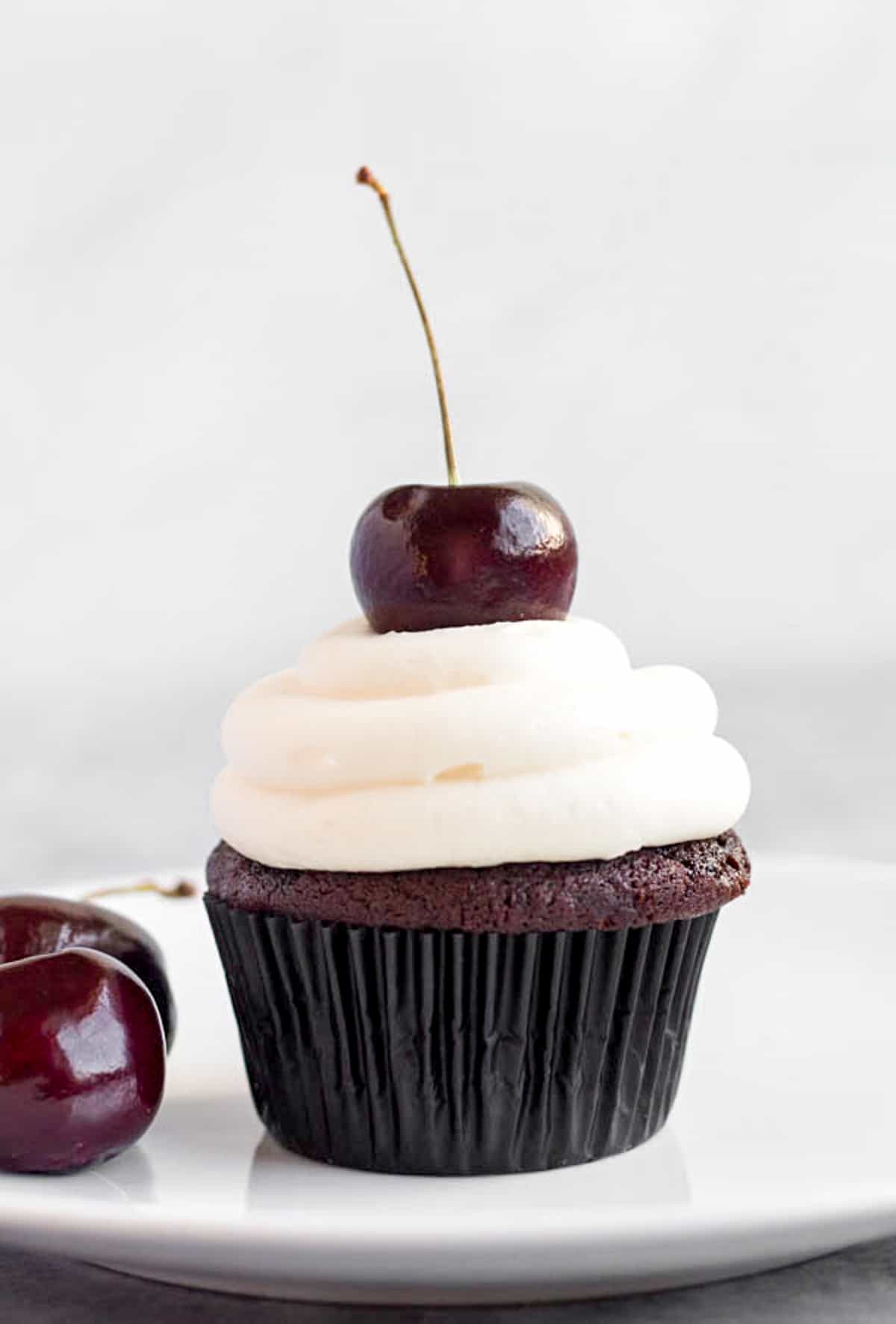 Whipped cream cheese buttercream frosting is so versatile and great for topping cupcakes, filling cakes and spreading on brownies. It's also super easy to prepare and definitely a no fuss recipe. Combine softened butter and chilled cream cheese and beat until combined. I use the cream cheese while it's still cold because it will heat up quite a bit with all the mixing. Using chilled cream cheese helps keep it more stable. Add in the powdered sugar and the vanilla and beat on low until combined. At this point, it's going to look yellow and pretty lumpy. Turn up the mixer to medium speed and whip until the buttercream has lightened in color and texture, about 3-5 minutes.

If you really wanted to get extra, after filling the cupcakes, puree the remaining cherry filling and drizzle it over the top of the cupcakes. So. Much. Yum. These black forest cupcakes are a must try. 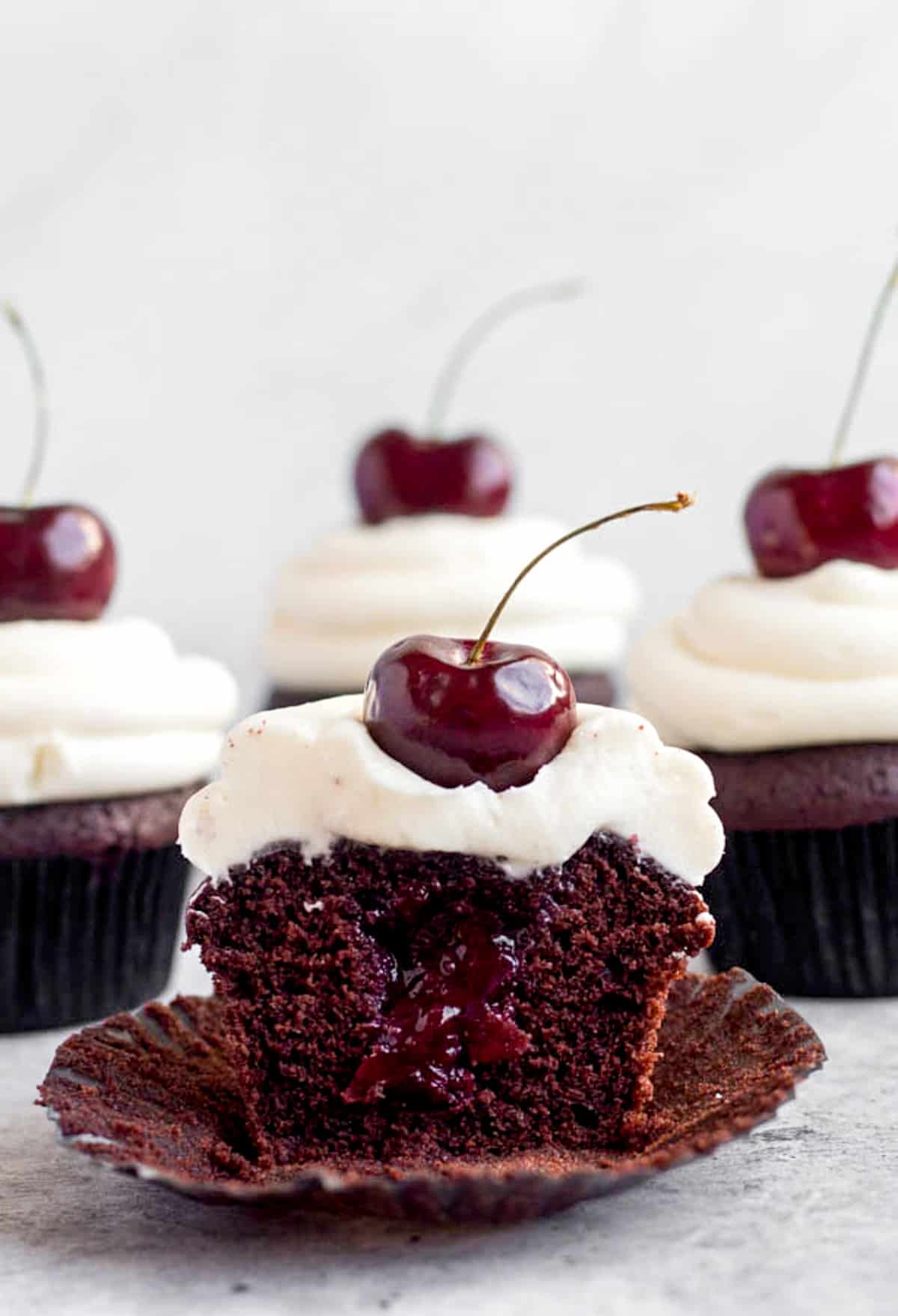 If you try my black forest cupcakes, let me know! Leave a comment in the comment area below and be sure to snap a photo and tag it #littlevintagebaking on Instagram. I love seeing your Little Vintage Baking creations!

For more chocolate desserts, check out these recipes: 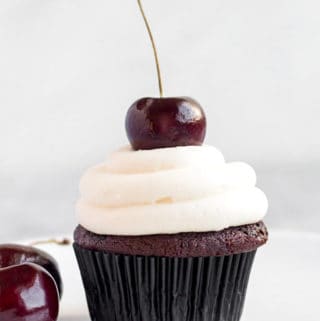 The cupcakes, without frosting can be stored for up to three days at room temperature in a air tight container.  The cupcakes with frosting must be refrigerated. Bring to room temperature before serving.
Tried this recipe?Let us know how it was!
« Honey Cardamom Peach Galettes
Gum Paste Blackberries, Leaves and Blossoms Tutorial »