French buttercream, the less commonly used of the egg based buttercream trio, but easily the most delicious. It's light and silky as a mousse but rich and luxurious as a pudding or custard. It's fabulous as a cake or macaron filling and is a fab way to use up any leftover egg yolks. It is the perfect vehicle for intense and decadent flavors, such as chocolate, nut butters and curds.

What is French Buttercream?

French buttercream is made very similarly to Italian buttercream, requiring a hot sugar syrup to added to egg yolks to form the base of the buttercream, but is faster since it doesn't require a meringue. Butter is then added and beaten to until thick and custardy. It's sturdy as a cake filling and holds its shape well when piping. Compared to Swiss and Italian buttercreams, French is the least stable of the trio, and doesn't fare well with warm weather. I tend to use French buttercream mostly as a filling for cakes or macarons, while frosting the outside of my cakes with Swiss or Italian. This is a great way to use both the yolks and whites.

How to make French Buttercream

French buttercream is custardy-like, due to the buttercream being egg yolk and butter based. Egg yolks are whipped on high to aerate and loosen up the yolks. The yolks will lighten in color and thicken a bit. Meanwhile, water and sugar are boiled on the stove to 238F - 240F. This sugar syrup is slowly drizzled into the beaten egg yolks and whipped until the mixture has cooled to room temperature.

Room temperature butter is added a few pieces at a time, followed by salt and vanilla. The mixture is then beaten until thick and creamy. Any additional flavors, like chocolate, fruit pureés, and more added after the buttercream has come together.

Since French meringue buttercream is made with yolks and butter, it has a yellow hue. Because of the color, and the high fat content, it does not take food coloring well. I do not recommend trying to color this buttercream.

If your buttercream seems too runny, your butter could have been too soft. Refrigerate for 10 minutes then rewhip.

If your buttercream seems too stiff or lumpy, your butter could have been too cold. Microwave the buttercream in 10 second increments, beating after each increment, until the proper consistency is reached.

If your buttercream looks curdled, keep mixing. Hang in there. It's going to be ugly before it gets pretty.

If you make French buttercream, let me know! Drop a comment or tag me on Instagram. I love seeing your bakes and creations.

For more buttercream recipes, check out these posts: 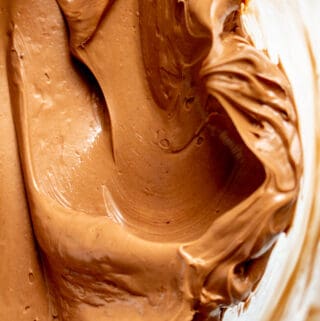 Tried this recipe?Let us know how it was!
« Gum Paste Chocolate Cosmos Tutorial
Classic Birthday Cake »