When I discovered Swiss meringue buttercream several years ago, I was intimidated by it. I didn't like the idea that I couldn’t just throw everything in a mixing bowl and start mixing as I had done with the buttercream I had been making at the time for my cakes. Swiss meringue buttercream requires a bit of extra time, costs a bit more and involves a process. But let me tell you, it is so worth it. Swiss meringue buttercream is luxuriously light and creamy. It’s silky, fluffy and smooth texture makes it a DREAM for filling and icing stacked cakes. It’s stable and holds its shaped when piped. It's perfect for getting those sharp, precise edges on layer cakes and is a great base for covering with fondant.

How to make Swiss meringue buttercream

You begin the process of making Swiss meringue buttercream by heating egg whites and granulated sugar in a bowl over a pot of simmering water. This process is to cook the egg whites and melt the sugar all while whisking continuously to avoid any scrambling. Once the egg white mixture reaches 160F, it is strained through a sieve into a stand mixer mixing bowl and using the whisk attachment, beaten until stiff peaks form and the bowl is room temperature to touch. At this point, softened butter is popped in piece by piece and then, and you leave it to mix on low for a bit. It's important to mix on low as to not incorporate air. Incorporating air into your buttercream can cause and contribute to cake disasters, such as blow-outs, air bubbles and sinking.

This is the time in Swiss meringue buttercream making that most people think they’ve destroyed it and they pitch all of that glorious (albeit, ugly at this point) buttercream. It’s quite possible your buttercream will look curdled, or super deflated. It might even look separated. But it’s ok. Let it keep mixing. This can take up to 10 or 15 minutes. Keep mixing and it will come together into creamy, silky and smooth Swiss meringue buttercream. Mixing the buttercream on low for a while allows it to fully incorporate, and eliminates air pockets - which is super important if you're making a fondant covered cake. It also helps creates that super silky, creamy texture.

Once the buttercream has come together and is fully incorporated, add the flavorings and a pinch of salt. Don't skip the salt - it helps to define the flavors you add to your buttercream. Swiss meringue buttercream is a blank canvas suitable for many, many types of flavorings. Jams, curds, cookie butters, nut butters, extracts, chocolates, etc. It holds flavors incredibly well so don’t be afraid to experiment.

Some common questions and concerns:

1. Swiss meringue buttercream is too buttery.

*Pro tip: If you love the texture and taste of Swiss meringue buttercream but want it a bit sweeter, add ½ -¾ cup of sifted confectioners sugar after the butter is fully mixed in.

2. Can I make Swiss meringue buttercream in advance?

3. Why aren't my egg whites whipping into stiff peaks?

Your mixing bowl and utensils must be grease free otherwise the eggs won’t whip up properly. They’re temperamental like that. Wipe down your bowl and utensils with a clean cloth and lemon juice or vinegar to remove remaining fat residue. I also don't recommend using carton eggs. Sometimes they work, sometimes they don't. I also don't find meringue made with carton whites to be as stable.

4. Why is my Swiss meringue rock hard after being refrigerated?

5. I'm adding loads of gel food color to color my buttercream but it's still not the dark color I want.

I also find that the support from using a meringue style buttercream, or ganache is important for supporting sugar flowers well in a cake. Buttercream that is more loose, doesn't firm in the fridge (like a shortening based buttercream) just doesn't have the stability of a meringue buttercream or ganache. Using Swiss meringue allows me to get sharp, clean edges on my cakes and stays firm while I am decorating, stacking, and transporting the cake.

*Use a candy thermometer or and instant read thermometer to make sure your temperature just reaches 160F. 160F ensures that all the bad bacteria is killed off in the egg whites. However, be sure to bring the temperature of your egg/sugar mixture up slowly and don't overcook your mixture. Rushing this process will result in scrambled and cooked egg whites.

*If your finished buttercream appears loose and more pudding-like, it’s possible that the butter was too warm when you added it to the meringue. Pop the bowl into the refrigerator for 10-15 minutes then mix again.

The recipe below is for vanilla bean Swiss meringue buttercream. But the flavor options are endless. Here are a few popular flavors to experiment with. Adjust the quantities to suit your taste.

*Chocolate - Add 3 cups (600g) of bittersweet chocolate, melted, to a batch of buttercream

If you try this Swiss meringue buttercream recipe, let me know! Leave a comment in the comment area below and be sure to snap a photo and tag it #littlevintagebaking on Instagram. I love seeing your Little Vintage Baking creations! 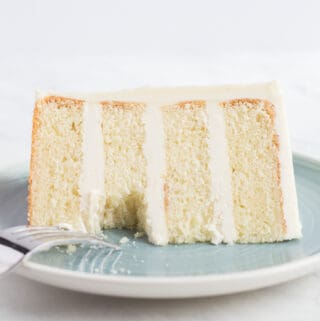 This recipe can be halved or doubled. One full recipe will fill and frost a 8" cake that is 4" or 5" tall.
Tried this recipe?Let us know how it was!
« Bacon, Cheddar and Chive Scones
Funfetti Sandwich Cookies »